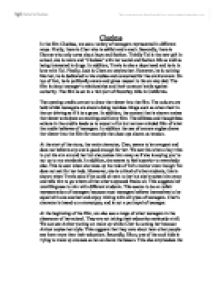 Clueless In the film Clueless, we see a variety of teenagers represented in different ways. Firstly, there is Cher who is selfish and a snob. Secondly, there is Dionne who only cares about boys and fashion. Thirdly Tai is the new girl in school, she is naive and "Clueless" with her social and fashion life as well as being interested in drugs. In addition, Travis is also a dope head and he is in love with Tai. Finally, Josh is Chers ex stepbrother. However, he is nothing like her, he is dedicated to his studies and concerned for the environment. On top of that, he is politically aware and gives respect to his ex step dad. The film is about teenager's relationships and their constant battle against authority. The film is set in a rich part of Beverley hills in California. The opening credits are set to draw the viewer into the film. The colours are bold whilst teenagers are shown doing reckless things such as when their in the car driving as if it is a game. ...read more.

They are not taking their education seriously at all. We can see Amber putting on make up whilst Cher is cursing her because Amber copies her style. This suggests that they care about how other people see them more than their education. Secondly, Elton, one of the cool kids is trying to make up excuses so he can leave the lesson. This also emphasises the fact that the teenagers are not taking their education seriously. In addition, the students are extremely in attentive. We see this where they are talking on phones and throwing paper balls about. This is implying that teenagers think of school as a chore rather than a privilege. This seems to be an unfair representation of teenagers because most do take education seriously. However, some teenagers do not take education critically but the film has exaggerated that. The majority of teenagers accept education is a privilege and try to make the most of it. ...read more.

Another thing they are doing is dancing and listening to music. This shows that teenagers love to party and socialise with other people even if it is in the presence of misbehaving. This reason shows us teenager's lack of respect for authority. It also shows teenagers want to be independent because they are having the party without any supervision. At the end of the film, our impression of Cher has changed because she has become more mature and less judgemental of others. She has become kinder and aware of important matters. We see this when she volunteers to help the beach disaster. This is an example of change because at the start she was not interested in helping other people. Overall, teenagers in this film are shown to be dim and arrogant. However, this film is an unfair representation of teenagers because the majority of teenagers are serious about their education and are not that rebellious to authority figures shown in Clueless. Furthermore teenagers are much more accepting of all kinds of people and do not go through the level of change shown in Clueless. By Amar Ali ...read more.