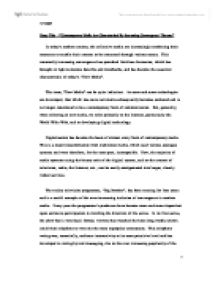 Essay Title - "'Contemporary Media Are Characterised By Increasing Convergence.' Discuss." In today's modern society, the collective media are increasingly combining their resources to enable their content to be consumed through various means. This constantly increasing convergence has provoked limitless discussion, which has brought to light numerous benefits and drawbacks, and has become the essential characteristic of today's "New Media". This term, "New Media" can be quite indistinct. As more and more technologies are developed, that which was once new media subsequently becomes outdated and is no longer considered to be a contemporary form of communication. But, generally, when referring to new media, we refer primarily to the Internet, particularly the World Wide Web, and to developing digital technology. Digitalisation has become the basis of almost every form of contemporary media. This is a major transformation from traditional media, which used various analogue systems and were therefore, for the most part, incompatible. Now, the majority of media operates using the binary code of the digital system, and so the content of television, radio, the Internet, etc., can be easily amalgamated into larger, closely linked services. ...read more.

Digital television has, and is evolving so rapidly, that new facilities are being developed and supplied to the audience almost daily. This is made possible by the convergence of media, combining previously distinct services. One of the newest developments in television is the viewer being able to create their own channel schedule, selecting from a catalogue of available broadcasts, which could, in theory, result in the same show playing continuously back to back. This could potentially lead to the demise of certain broadcasts that fall out with the mainstream. However, this is a rather recent development in digital television and may not become a wide spread occurrence, as the current general public still, to a certain extent, appears to have an interest in traditional mixed programming. The Internet has also played a huge part in the convergence of contemporary media. At various points during a television or radio show, the presenter will announce a web address relating to the programme. It will normally contain further information, additional articles relating to the topic at hand which were not featured in the programme, competitions, games, products or merchandise available to purchase, or perhaps the opportunity to experience the show again at a later date. ...read more.

It allows customers to receive instant news updates etc. without having to buy a newspaper, wait for scheduled televised news to be broadcast, or sit down at a computer to view a news based web site. However, there are a number of proposed down falls to excessive convergence. There have been debates that have brought to light the issue of concentrated ownership across all forms of media. For example, News International, owned by Rupert Murdoch, is in control of a large portion of Scotland's press, along with Sky Television. There are fears that as ownership becomes less and less widespread, media coverage will only be concentrated on majority interest subjects. Some are concerned that pressure from sponsors or advertising groups could challenge programme makers' ability to produce content which goes against popular views or demands, due to profit and viewing figures being the principal factors. It could be argued, however, that convergence is enabling those, whose media interest is concentrated in only one specific area, such as television, to become more involved in other forms. ...read more.