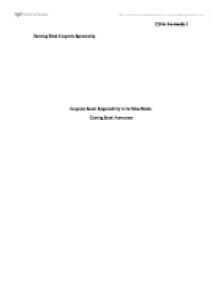 Running Head: Corporate Sponsorship Corporate Social Responsibility in the Mass Media: Creating Social Awareness Corporate Social Responsibility in the Mass Media: Creating Social Awareness Media advocacy is one of the most pervasive methods for charities and non-profit organizations to advance a social cause through informing the general public (Kotler & Lee, 2005). These organizations create advertising or public service announcements that infiltrate the commercial environment of media outlets in an attempt to raise awareness and fundraise on behalf of specific social issues. Through understanding the principles and effects corporate social responsibility and analyzing previous installments of CSR in media outlets, it is possible to maintain a balance among duties of reporting the truth, while simultaneously maintaining a profitable business, and improving the society a publication or company serves. Defining Charitable Organization The first step to understanding CSR is determining what constitutes a charitable organization. In the United States, a charitable organization is defined as a non-profit group that is created with the intent to benefit the general public. Each state has varying laws regarding requirements and policies for the creation of a charitable organization, as well as the regular formalities for organizations that solicit contributions (Kotler & Lee, 2005). ...read more.

Media outlets can help spread knowledge about social causes by advertising (at a discounted rate) or showcasing relevant stories in print or over the airwaves. These companies can withstand the pressure to integrate some form of CSR into their corporate governances, as exemplified in the descriptions of efforts previously made by media outlets: New Technologies Google Grants. Google Grants offers donations for AdWords advertising (Google's primary source of revenue) to several charitable organizations. The organization's philosophy is to help the world in areas including science, technology, education, global public health, the environment, youth advocacy, and the arts. AdWords is Google's flagship advertising product; it offers pay-per-click advertising, and site-targeted marketing for both text and banner ads in local, national, and international arenas. This form of marketing reaches Google users who search for specified keywords that are relevant to an organization's cause by appearing as a sponsored link next to the listed search results. The program also offers companies an opportunity to review statistics regarding the success of the advertisement, including the totals and percentages of volunteer sign-ups, donations, and registrations (Google, 2008). Atlanta Journal Constitution, San Francisco Chronicle, Boston Globe. ...read more.

To qualify, an issue must be non-partisan and have national relevance. The Advertising Council then assigns each campaign to a volunteer advertising agency that produces the actual advertisements, then distributes the finished advertisements to media outlets (Ad Council, 2008). Enviromedia. EnviroMedia, a public relations and advertising agency based in Austin, Texas, held a contest to reward personnel who reduce their dependence on fossil fuel. Staff members are asked to track their usage and what they are doing to conserve fuel; those who participate will be entered into a drawing for prizes. EnviroMedia also offered $5,000 worth of pro bono marketing services to any U.S. small business that provided proof of the largest percentage decrease in employee fuel consumption over a 90-day period (EnviroMedia, Inc., 2005). Conclusion In an era of consumerism that is defined by its confidence in the media, it is vital for mass media companies to take responsibility for their roles in society. It is one of the chief duties of the media to be advocates of the society it exists within by support non-profit organizations and charitable causes consistent with the public interest. By understanding and applying the steps of CSR within the realm of the media, companies can contribute to the wellbeing of the current generation and generations to come. ...read more.