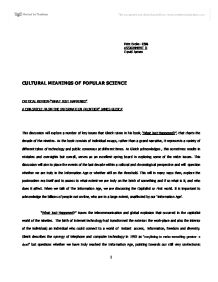 Critical review - 'What Just Happened?&quot;, a chronicle from the information frontier - James Gleick.

Pete Broks- C56 ASSIGNMENT II David James CULTURAL MEANINGS OF POPULAR SCIENCE CRITICAL REVIEW-"WHAT JUST HAPPENED" A CHRONICLE FROM THE INFORMATION FRONTIER" JAMES GLEICK This discussion will explore a number of key issues that Gleick raises in his book, 'What Just Happened?", that charts the decade of the nineties. As the book consists of individual essays, rather than a grand narrative, it represents a variety of different takes of technology and public consensus at different times. As Gleick acknowledges , this sometimes results in mistakes and oversights but overall, serves as an excellent spring board in exploring some of the wider issues. This discussion will aim to place the events of the last decade within a cultural and chronological perspective and will question whether we are truly in the Information Age or whether still on the threshold. This will in many ways then, explore the postmodern era itself and to assess to what extent we are truly on the brink of something and if so what is it, and who does it affect. When we talk of The Information Age, we are discussing the Capitalist or First world. It is important to acknowledge the billions of people not on-line, who are to a large extent, unaffected by our 'Information Age'. "What Just Happened?" traces the telecommunication and global explosion that occurred in the capitalist world of the nineties. The birth of Internet technology had transformed the exterior: the work-place and also the interior of the individual; an individual who could connect to a world of instant access, information, freedom and diversity. Gleick describes the synergy of telephone and computer technology in 1992 as "conjoining to make something greater- a dyad" but questions whether we have truly reached the Information Age, pointing towards our still very unelectronic reliance on the document and use of paper. He asks whether people still frightened of too much information and why? ...read more.

that multiple realities are of a single, time and space...The Internet is another in a line of modern technologies that undermine the traditional notions of civil society that require unity and shun multiplicity while giving the impression that they in fact re-create such a society. The Internet brings us together, but the best that we can do, overwhelmed by the vastness of all it seems to encompass, is to ask how to organize it, lest it disturb the fundamental idea of cultural order."(JONES 1997: p25) The Internet and science and technology as a whole, are " proplasms'. They are forever mutating and changing shape. "it is an infrastructure that needs to be expanded and maintained and is not growing by design but by accretion. It resembles not a fat, linear highway but a protoplasmic organism, or colony of organisms. New bits are constantly floating along and adjoining themselves to the main mass and as they do the internet grows by another degree.(GLEICK 2000:p 4). What we see here is a living organism that is at risk then? Therefore, if a corrupted program were to integrate itself within this hive-like infrastructure, it may collapse. It may one day threaten our existence as we grow to depend on it even more. Cyber-terrorism and Virus-infections risk the economic stability of the corporate world and the Y2K crisis, if nothing, affirmed the significance we place on our technology and how scared we are that it will decay or turn against us. We have recognized the threat of cyber-terrorism and equated it with Apocalypse to some extent. Is this why we have such invasive and ALIEN language for technology and the programs that it contains. This is a theme touched on by Gleick in 'Chasing Bugs in the Electronic Village' where he discusses the growth of Microsoft and de-bugging problems encountered. The words 'BUG' and 'VIRUS' are symbolic metaphors, Gleick proposes. ...read more.

The growth of technology and science, combined with globalization, war and over-population can be seen to represent a crisis that we have attributed to the modern era. However, as Mike Jay notes in '1900- Fin-de-seicle-A reader 1999 PENGUIN '"we discover a parallel complex set of crises grouped under the term fin-de-seicle. Much of what we think of as new or modern crisis presents itself to us in similar form. The future of the human race, the apocalyptic possibilities opened up by science, crisis of faith, the multi-cultural global village." (Jay 1999: p1-Intro). Our pre-millennium period was in many ways similar to the fin-de-seicle a hundred years ago but in many ways inverted. Therefore the celebration of the new and optimism for the future that was crystallized at the turn of the 20th Century can be juxtaposed against the pessimism and rejection of the past in the next (still a hope for the future but a lot less assured). Jay argues the fin-de-seicle was in fact the true Millennium and that our modern day crisis are " little more than the aftershocks of the fin-de-siecle amplified and diffused by an increasing overwhelming global media". He underlines the most significant difference in that the core of the Millennium paranoia involved a "spectre of finality, of apocalypse- an imminent event or singularity that may spell doom." (Jay 1999:p2-Intro). To close, we may question whether we are truly immersed in a postmodern age and argue that instead we are within a pro-futura era. Therefore, we are still on the threshold of something yet to come, rather than an end. We may still be in the Age of Paperwork, as Gleick believes, and also on the verge of the real information frontier where true unity can be reached. From this we may surmise that only when information is pure knowledge, rather than a commodity or weapon, will it be free of suspicion and fear. As Gleick states "When someone offers you ten times the amount of information as you already have, and that makes you feel good, only then will we be in the Age of Information Transparency. ...read more.