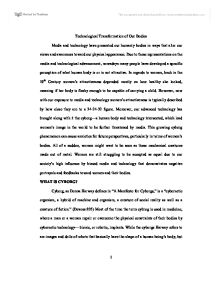 Cyborg - our advanced technology has brought along with it the cyborga human body and technology intersected, which lead womens image in the world to be further threatened by media. This growing cyborg phenomenon can cause anxieties for future persp

Technological Transformation of Our Bodies Media and technology have presented our humanly bodies in ways that alter our views and awareness toward our physical appearance. Due to these representations on the media and technological advancement, nowadays many people have developed a specific perception of what human body is or is not attractive. In regards to women, back in the 19th Century women's attractiveness depended mostly on how healthy she looked, meaning if her body is fleshy enough to be capable of carrying a child. However, now with our exposure to media and technology women's attractiveness is typically described by how close they are to a 34-24-32 figure. Moreover, our advanced technology has brought along with it the cyborg-a human body and technology intersected, which lead women's image in the world to be further threatened by media. This growing cyborg phenomenon can cause anxieties for future perspectives, particularly in terms of women's bodies. All of a sudden, women might want to be seen as these mechanical creatures made out of metal. Women are still struggling to be accepted as equal due to our society's high influence by biased media and technology that demonstrates negative portrayals and feedbacks toward women and their bodies. WHAT IS CYBORG? Cyborg, as Donna Harway defines in "A Manifesto for Cyborgs," is a "cybernetic organism, a hybrid of machine and organism, a creature of social reality as well as a creature of fiction." (Devoss 835) Most of the time the term cybrog is used in medicine, where a man or a woman repair or overcome the physical constraints of their bodies by cybernetic technology- bionic, or robotic, implants. ...read more.

Perhaps these "high- tech" cyber bodies will have a mechanical reproductive system that could reproduce, so real human women will become absolutely insignificant in the world. Cyborgs Leading to a Development in Beauty Technologies Due to our technology advancement and media influence about cyborgs, women have had the urge to become extra beautiful, extra thin, and extra womanly by using many different technologies such as bodybuilding, cosmetic surgery, and more. As Marleen Barr proclaims in "Technologies of the Gendered Body: Reading Cyborg Women," "although technology enables us to remake and reconfigure the body its spatial locality, old cultural standards prevail: cosmetic surgery allows women better to conform to female beauty standards and women are harassed in cyberspace." (Barr 131) Women's harassment by cyberspace might be interpreted by how social and cultural expectations force women to become a certain way. A woman in her 60's that undergoes a cosmetic surgery to become young and beautiful as the cyber body, only leads me to believe she is an insecure, vulnerable woman- she is incapable of dealing with the natural cycle of life. Then again, women in society are exposed and threatened by this young anorexic provoking media. These technologies, such as plastic surgeries, have only developed because of our media, slowly tricking us to believe that only a certain type of body is attractive and accepted. Furthermore, women start to believe that this is the only way to be accepted and therefore heard in our society. ...read more.

This movie depicts women not only in terms of appearance but in behavior and judgment toward women's accomplishments and opinions. In this movie, women's opinions are not significant; the women have no option to have a career. Only the men have the career, further stressing that they are the only ones that are able to provide financial support and dominant over the house. Another TV show is the show Small Wonder was an American sitcom that aired from 1985 to 1989. The show chronicled the family of a robotics engineer who, after he secretly creates a robot modeled after a real human girl, tries to pass it off as their daughter. This scary show shows how humans, can simply substitute a human being. Perhaps in the future real humans would not even need to be present and only robots can control this world, as the movie Wall-E observed. Our media and technologies predict our future philosophies on women's bodies and attitude towards them. Even though, the movement toward feminism started many years ago, it is far from being achieved with the "help" of our media and technology representing women's bodies as cyborgs. Soon women's bodies will reveal no skin, only metal; wires and buttons males can press on for their own sakes and pleasures. Real women will not be necessary. Perhaps males would not be either. Let these Robotic human surrogates simply take over our world, reproduce for us, think for us, and survive for us. We need to be aware of our own invention with media and technology because soon in our near future we might find ourselves destroying civilization and our earth. ...read more.