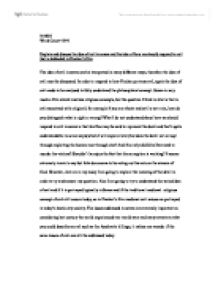 The idea of evil in seven can be interpreted in many different ways, therefore the idea of

evil must be discussed. In order to respond to how Fincher portrays evil, again the idea of

evil needs to be analysed to fully understand the philosophical concept. Seven is very

much a film which involves religious concepts, but the question I think is vital is that is

evil associated with religion?, for example if you are atheist and evil is not a sin, how do

you distinguish what is right or wrong? What I do not understand about how we should

through exploiting the human race through sins? And if so why did John Doe need to

murder his victims? Shouldn’t he enjoy the fact that his corruption is working? It seems

God. However, later on in my essay I am going to explore the meaning of the devil in

order to try and answer my question. Also I am going to try to understand the varied idea

in today’s hectic city society. The issues addressed in seven are extremely important as

you could describe as evil such as the Auschwitz killings, it makes one wonder if the

same issues of evil can still be addressed today.

The film Seven is set in modern New York, the dark chilling story tells of how two

detectives have to hunt down a serial killer, as over the course of a week seven murders

Envy and Wrath. Although set in the twentieth century the origins of the seven deadly

sins date back as far as the time the bible was being written. Instead of being listed all at

once they occur in different sections throughout. It was Dante Alighieri (1265 - 1321),

however, a Catholic priest who listed them together in his book the Divine Comedy as a

But the question this leads me to ask is; what kind of reality does God actually have? If,

hundreds of years ago when civilization was unaware of the world, all one had to believe

in was God and the afterlife of heaven, how does that compare to nowadays where we are

aware of the world we live in? nowadays there are more and more people turning against

religion, but does that mean they still withhold moral values? And if a wrong is not a sin

and avoid it even though the threat of the devil is not occurring. Atheist philosopher

in modern day do not need to believe in God, therefore acts such as the seven deadly sins

may be seen as wrong but not, anymore sinful. Nietzsche believed that humans should

living(Grundy:2005). His idea was that humans were living as what he described as a

‘herd’, living by everybody else morals and values, so that life can be kept sensible.

(Salubri:1997). ‘The death of God’, however can not just be interpreted in Nietzsche’s

view. Neietzch used the phrase to describe atheism and how the thought of God is no

longer needed. It is known as ‘radical theology’ and can mean different things altogether.

its place, but somewhere along history God has died and the world has changed, therefore

evil is unjustified nowadays (Sams: 2005). Kant, on the other hand rejects the Neietzch

theory as his ideas of morals and evil are completely different. Kante believed we are free

to distinguish our own morals and what can be classed as evil, therefore we are capable

of making the decision as to what is right or wrong. "Act only on that maxim whereby at

the same time you can will that it shall become a universal law"(Unknown: 2005). In

other words, if we are to commit an evil we should imagine what would become of the

world if we were to all do the same. These theories are particularly important when

discussing the film seven, in order to trace the concept of the idea of evil in seven and

how we should respond to evil that is defended in the film.

film as a man with serious psychological problems, easy to understand why one could

come to the conclusion that he represents the devil, he commits seven gruesome murders

in which he justifies by stating that his victims were committing sins of religion anyway.

However, the irony is that these sins would lead to a spiritual destruction therefore it was

not his place to become involved. To explain the idea of evil in seven with regards to the

character John Doe it is vital for one to analyse the concept of the devil himself. It is clear

that John Doe hated the world as he cannot be as he wanted to be, thus he was struck with

envy. The devil is an important factor to discuss evil as the bible state that “all God

created was good” (Devil: 2005), meaning that the Devil must have been created good

originally. If that lays the case then does that mean we are all created good and evil is

inflicted upon ourselves? Kant suggests that ‘nothing is good in itself, except good will’

The presumption that John Does represents the devil can be made in many ways. In seven

John Does is patient and calm, all the way until the end of the film as long as he was the

one in control and powerful he was getting along well. Even though it was acts that were

of an evil nature as long as they bought him power he did not mind. Extremely similar to

the devil, an example would be another passage from the bible “Satan rules the world

through deception and sin, not legitimately by God” (Devil: 2005). However, the problem

we have with the existence of the devil is with the devil comes evil, author Peter Kreeft

quoted in one of his books:

The problem of evil is the most serious problem in the world. It is also the one serious

objection to the existence of God. More people have abandoned their faith because of the

problem of evil than for any other reason. It is certainly the greatest test of faith, the

greatest temptation to unbelief. And it's not just an intellectual objection. We feel it. We

live it. That's why the Book of Job is so arresting.

Leading back to the question what kind of reality does God actually have? As mentioned

the bible states all God created was good so how did the world get this way? Why did the

devil appear with his sinful temptations? It may seem like an unanswerable question but

even empirical philosophers seem to believe it can be answered. Somebody who practices

experienced it, thinkers such as Hume demonstrate this. However, Hume does believe

universe is so complex and everything fits together perfectly, therefore there must be an

intelligent being that created us, thus God. Meaning that we can learn to associate God

with evil and accept god with all the wrongs in the world, even if we do not necessarily

good throughout the film. My thoughts on the film were that John Doe represented the

devil and that Somerset represented God. As viewers, we see how Doe was content on

destroying life as Mills knew it; however Somerset did not seem to be affected personally

by Doe, could this be because Doe is aware Somerset is plating the role of God?. Back to

sins on earth, at the end scene in the car Somerset seems to agrees with Doe, yet although

realising that their consensus does not justify Doe's irrational, yet seemingly rational

killings. This leads me to believe that Somerset is speaking as God that there are many

people on earth committing what are classed as deadly sins.

and although the crimes he committed were on what he would call sinners, these people if

believed in religion would meet their fate spiritually. Doe was portraying the devil in

wanting power and the feeling he was in control of the situation he created. By reading

wants to portray it. If one believes that we are born good and that we decide our fate then

killed as everyday people who just lost their way somewhere along the line, but however

committing ‘sins’ such as the seven deadly sins they are deciding their own fate, Doe on

the other hand was deciding other peoples which I believe is rightfully evil.