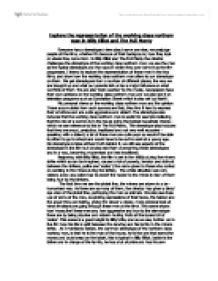 And by the end of the film we see how he is, he's done what he wanted to do, gained respect. Grown from a boy to a man. And he's 'not a puff'! Following on with Jackie's character, Billy and Tony's father. He is very much the man of the house; he's had to take on the role of the mother and father, after his wife has died. He is what you would call the typical working class northern man. He's proud in believing that it's his job to earn the money, and won't accept 'charity' from the dance teacher to pay for the journey to London. He's sexist in saying that ballet is for girls, "lads do boxing, football ... wrestling, not frigging ballet". He can't understand why Billy would want to do ballet instead of boxing like he and his father did. His pride has been hurt, and he probably thinks Billy's doing it against him, he's traditional in this way as well. He's also aggressive and quite violent, when we see him with all the other miners on the picket line hurling abusive at the scabs. When see him shouting at Billy on several occasions - at the start of the film, when Billy is playing the piano and Jackie shouts at him, and during the middle of the film we see the incident where he hits Tony. I think he sometimes struggles to keep his status and needs to make sure that everyone knows 'who's boss'. In contrast to this, we do see Jackie's sensitive side and the part that goes against the stereotype. After the scene with him shouting at Billy we see him change and put a 50p on the fridge for his boxing, so he doesn't go out the house feeling angry with him. We see this side from very early on but only does it change further on in the film when he realises Billy is serious on ballet. ...read more.

Looking at film language in Billy Elliot, I have found that each character is represented in a different way, Billy is always wearing quite bright colours and in lots of scenes with him in there is music which reflects upon is personality. Whereas Jackie and Tony's characters are more mysterious and even though there is a scene where everyone is dancing to the same tune there isn't as much 'happy' filming with them. The use of scene cutting between the miners and Billy dancing is used to great effect creating a massive contrast between the two, making the miners scene more powerful and effective. The use of long shot camera angle is good as well, the classic part in the film of Billy running up the hill and later with his father doing the same. Looking at the very last scene of the film, an extremely moving piece. The film has moved on about 7-10 years, we see Jackie has aged, having grey hair. They have come to watch Billy in a performance of Swan Lake (a link from when the dance teacher took Billy to played him the piece of music). Little is said by Billy as he waits in the wings, the music of the ballet piece is played and we see Billy warming up and getting ready to go on. The music and the way Billy is acting builds up incredible tension and enthusiasm. The scene cuts to Jackie and back again, we see Billy rush on stage and the scene cuts back to Jackie where he gasps/cry's in amazement. We see a close up on his face to see his sense of pride and astonishment. The film ends with a picture of Billy mid air, in a jump. Personally, I feel this last scene is the most memorable of the whole film, I was really into it. The way it has been filmed really gets the viewer to actually believe what is going on. It feels as if your Billy and Jackie, feeling nervous, excited and amazed. Best part of the film for me! ...read more.