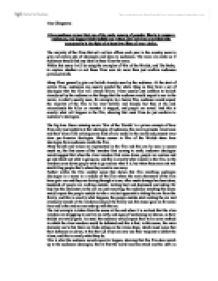 It is sometimes argued that one of the main reasons of popular film is to reassure audiences, and support their beliefs and values. Say how true you think this argument is in the light of at least two films of your choice.

It is sometimes argued that one of the main reasons of popular film is to reassure audiences, and support their beliefs and values. Say how true you think this argument is in the light of at least two films of your choice.

The majority of the films that sell out box offices each year in the country seem to give out certain sets of ideologies and ideas to audiences. The main aim looks as if audiences should find any ideas in these films the same.

Within this essay I will be using the examples of War of the Worlds, and The Burbs, to explore whether or not these films ever do more than just confirm audiences previous beliefs.

Many films generally give out beliefs already seen by the audience. At the start of certain films, audiences can usually predict the whole thing as they have a set of ideologies that the film will always follow. Films usually just conform to beliefs already set by the audience as the things that the audience would expect to see in the movie, is what’s usually seen, for example; In a horror film, audience would expect the majority of the film to be very horrific and bloody, but then at the end miraculously the killer or monster is stopped, and people are saved. And this is exactly what will happen in the film, showing that most films do just conform to audience’s ideologies.

The big time Oscar winning movie ‘War of the Worlds’ is a prime example of how films only just conform to the ideologies of audiences, this movie presents Americans and their way of life as being some kind of role model to the world and presents very clear pro-America ideologies. Many scenes in War of the Worlds show how ideologies from audiences match the film.

Many beliefs and values are represented in the film and this can be seen in scenes much as; the first scene of the invaders first coming to earth, audience ideologies would suggest that when the alien invaders first come down, people are curious and go and check out what is going on, and this is exactly what is done in the film, as the invaders come down people want to go and see what it is, but when they come out and start killing people that’s when they want to run away.

Further within the film another scene that shows that film matching audiences ideologies is a scene in a middle of the film where the main characters of the film have got a car and they are driving through a town, after much damage has been done, hundreds of people are walking outside, looking hurt and depressed and asking for help but the characters in the car are just removing, the audience watching this scene would expect the people outside to take a violent approach to taking the car from the family, and this is exactly what happens, the people outside start rocking the car and eventually smash all the windows and pull the family out, this tassel goes on for some time and in the end no-one ends up with the car.

The last example is taken from the scene at the end when it is realised that the alien invaders are struggling to survive on earth, and signs of weakening are shown, as their shields are totally gone. As usual the audience would expect their to be some method in which the alien invaders would be defeated and this is that, in this scene, the main character see’s that there are birds sitting on the aliens ships, which must mean that their defences are down, at this that US army can now use their weapons to defeat the aliens, and this is exactly what they do.

This is what the audience would expect to happen, showing that this film does match up to the audiences ideologies, that at first the world receives attack and the USA as being the most powerful nation, are the ones who discover how to defeat the invaders, but as usual America becomes victorious at the end, showing that they are always the nation to come out on top. This proves this point.

There are other films on the other hand that might seem more complicated than this and would show some means of matching audiences ideologies, but at some means also going against. A film that can be described at being that type of movie, is ‘The Burbs’ This film is a film set in a modern American suburb (burbs). This film shows the normal lives of people living in a neighbourhood in the suburbs and the normal lives they lead, the film shows what they do on a daily basis, showing the neighbours all knowing each other perfectly well, showing people competing for the better looking home, showing happy families and every thing being normal, which would be evidence of the film matching with audiences ideologies of what happens in the suburbs. But then there is a twist to the movie, as when you get into the movie you see that the film and characters go against audience’s normal ideologies, as when you actually within the neighbourhood and you get through their doors you see that what you expected is way out of the window. This film show a different approach as audience’s ideologies are bent and what they see within the film is far form what they expected.

There are only a few scenes in this film that conforms to audiences ideologies; one example is the opening scene. Within this scene you can see what happens in a normal suburban neighbourhood. Ideologies met by the audience can be matched by the film as in the beginning you see a normal suburban neighbourhood, nice houses with nice lawns, nice cars in peoples drive ways, people to coming out in the morning to get the mail and people taking their dogs for morning walks. This shows how normal suburban life is usually like. But then what is a not expected start to come out of this movie, the whole movie basically goes against audiences ideologies, as can be seen from the very start to the end of the film.

As you go on through the movie you realise more and more that this particular film is rather odd, and things you wouldn’t expect to see occur. A certain scene in this movie that proves this point is when the neighbours wonder upon them selves why they have not seen the Klopecs and how they are going to suss them out as they believe there is some thing wrong with them, with this believe they decide they will find a way to get the Klopecs out of their house so they may investigate and find a way into their house. This would not be expected in a normal suburban neighbourhood, the audience would be expecting to see them just keep out of the Klopecs business, but no these neighbours want to investigate, this wouldn’t be seen in a normal neighbourhood and this shows how the film goes against audiences ideologies.

The last example of how this film twists audience’s ideologies is a scene where the neighbours realise they haven’t seen one of the neighbours in a while and now decide to blame the Klopecs, there suspicion is that the Klopecs are murderers and that they have killed their missing neighbour. So the neighbours decide to break in to their missing neighbours house to investigate where they mite be, and when the find a toupee, the dog, and no sign of life they then come to the conclusion that the Klopecs are responsible, and now decide to come up with a plan in which they will find a way to get into the Klopecs house when they leave and find the body of the lost neighbour. Well this would be never found in a normal neighbourhood, and this can be seen as going against audiences beliefs, no audience would expect to see any neighbours break into any neighbour’s house to investigate, a silly suspicion.

From all this it can be seen that many films don’t just reassure audiences and support their values. Many films do, do this but this is not all they do. There are a number of films that go against the ideologies that the audiences would have, as can be seen from The Burbs. Usually films that you wouldn’t expect to go against audiences values are the ones that do, showing that maybe this is a certain trick that movie makers do to make audiences think that the movie will go in one direction not expecting it to turn, but then it does. This shows how films don’t just reassure audiences, and support their beliefs and values.