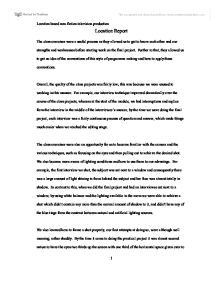 Location Report The class exercises were a useful process as they allowed us to get to know each other and our strengths and weaknesses before starting work on the final project. Further to that, they allowed us to get an idea of the conventions of this style of programme making and how to apply these conventions. Overall, the quality of the class projects was fairly low; this was because we were unused to working in this manner. For example, our interview technique improved dramatically over the course of the class projects, whereas at the start of the module, we had interruptions and replies from the interview in the middle of the interviewee's answer, by the time we were doing the final project, each interview was a fairly continuous process of question and answer, which made things much easier when we reached the editing stage. The class exercises were also an opportunity for us to become familiar with the camera and the various techniques, such as focusing on the eyes and then pulling out to achieve the desired shot. We also became more aware of lighting conditions and how to use them to our advantage. ...read more.

We decided to use this to break the programme up, it would act as the link from one section to another, for example when we went from looking at hair cutting to piercing, whilst also giving the film an over-all feel, some continuity throughout. As a group, we functioned very well together, all decisions were taken democratically with all group members contributing ideas and decisions on which ideas should be used and which discarded. This made the final product far better, 'the whole is greater than the sum of it's parts' was the maxim we worked to - the more input from different members of the group, the more good ideas would become part of the film. The finished product was no one person's vision, however, the unity of the group meant that all involved were happy with it; this was not a mis-matched mosaic. (For a complete breakdown of the work done see the appendix) We started work on the film on the 3rd of April with a preliminary meeting to finalise the decision for the topic of the film and discuss what angle we wanted to take and any ideas any of us had. ...read more.

On the 7th of May we started editing, we were started for 9am and finished the piece at 10pm. The actual physical manipulation of editing suite was carried out by myself, however, the decision process was very much a group effort, discussing various ideas, and sometimes trying them until we came up with a combination that we were all happy with. The work we had done the day before in planning made a massive difference to this process, we were able to edit some sequences straight away in the morning, and the selection process throughout was aided both by the overall structure we had decided on and the logging we had carried out. Two main problems emerged in the piece. Firstly the titles of the interviewees are sometimes slightly cut off on the screen. This was because we were unaware of the safety areas marked in the text tool of the editing suite. Secondly the music levels were too high in places which distracted from what was being said, however, the presence of the music itself was in keeping with the overall style of the piece, and the only problem I felt was present with that aspect was the levels. Location based non-fiction television production 1 ...read more.