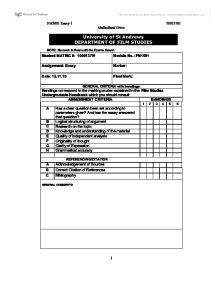 University of St Andrews DEPARTMENT OF FILM STUDIES NOTE: No mark is final until the Exams Board. Student MATRIC #: 100013701 Module No.: FM1001 Assignment: Essay Marker: Date: 15.11.10 Final Mark: GENERAL CRITERIA with bandings Bandings correspond to the marking scales explained in the Film Studies Undergraduate Handbook which you should consult: ASSESSMENT CRITERIA BANDINGS 1 2 3 4 5 6 A Has a clear question been set according to parameters given? And has the essay answered that question? B Logical structuring of argument C Research on the topic D Knowledge and understanding of the material E Quality of independent analysis F Originality of thought G Clarity of Expression H Grammatical accuracy REFERENCING/CITATION A Acknowledgement of Sources B Correct Citation of References C Bibliography GENERAL COMMENTS: University of St Andrews DEPARTMENT OF FILM STUDIES Declaration of Own Work Form Student's MATRICULATION Number: 100013701 Module Number: FM1001 Module Title: Key Concepts in Film Studies Module Convener (Tutor): Dr Leshu Torchin (Paola Monaldi) Essay Deadline: 15.11.10 Essay question: Analyse a short sequence (maximum of 10 minutes) from any film drawn from the module. Discuss the way in which this sequence utilises such formal aspects as: editing, cinematography, colour, mise-en-sc�ne, sound, music, acting styles, star persona (etc.), in order to further the narrative and themes over the overall film. DECLARATION I hereby declare that the attached piece of written work is my own work and that I have not reproduced, without acknowledgement, the work of another. ...read more.

Both women rush home to unlock the box and resolve the mystery of Rita's identity; this is the point in the film in which Diane's fantasy begins to truly disintegrate. Club Silencio ultimately makes Diane's displaced history pre-conscious, and the box Betty finds in her bag is the step needed to make it conscious. With the box opened, the camera sinks into its black core and the box falls to the floor, pre-conscious is turned into conscious as now Betty disappears and Diane's waking in her flat marks the beginning of the end. Her dark secret of murder and deception is revealed as well as Rita/Camilla's identity, her murder becoming the source of Diane's ultimate death wish and desire for silencio. Ultimately, Mulholland Drive is a mediation on the nature of cinema itself as we explore, through the relative safety of the medium, dark interior worlds not otherwise apparent. It presents the possibility of hope in the guise of a mystery film juxtaposed by the obsessive self-destruction of an individual; emphasising the importance of the cinematic experience, not the deciphering of narrative detail. The technical aspects ultimately work together to present a statement not only on the seductive power and cruelty of the film industry and Hollywood, but the deeper mysteries of desire and the innermost working of our unconscious, asking us to rethink terms such as illusion and reality. Mulholland Drive is an immersing and standout piece in an incredible body of work which suggests that the order we crave in our waking life may indeed be illusory, with the apparent chaos of the unconscious more meaningful. ...read more.