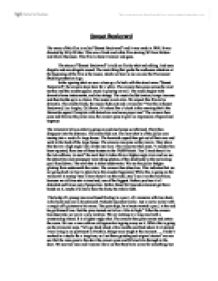 Sunset Boulevard The name of this film is called "Sunset Boulevard" and it was made in 1950. It was directed by Billy Wilder. This was a black and white film starring William Holden and Gloria Swanson. This film is about violence and guns. The story of "Sunset Boulevard" is told on film by shot and editing. And uses diagetic and non-diagetic sound. The main thing that grabs the audiences attention at the beginning of the film is the music, which we hear as we can see the Paramount Studios production logo. In the opening shot we see a close up of a kerb with the street name "Sunset Boulevard", the camera stays here for a while. The camera then pans across the road surface and the credits appear, music is playing as well. The music begins with dramatic brass instruments, and also strings. ...read more.

You'll read about it in the late editions, im sure" the next shot is taken from a higher angle view and we see the detectives and newspaper men taking photos, of the dead body in the swimming pool faced down. The next shot is taken underwater. We see the police badges glinting from underneath the water. The camera then dissolves. This indicates that we are going back in time to show how this murder happened. While this is going on the voiceover is saying "you'll hear about it on the radio, you'll see it on the television, because an old time star is involved, one of the biggest. Before you hear it all distorted and blown out of proportion. Before those Hollywood columnist get there hands on it, maybe I'd like to hear the facts, the whole truth. The body of a young man was found floating in a pool, of a mansion with two shots in his back and one in his stomach. ...read more.

We see two men and it seems like to us that they have come for something, but the voiceover keeps us informed. "To a week I seemed to have lost my touch, maybe they weren't original enough, maybe they were too original? All I know is that they didn't sell" After the two men go, the camera cuts and the man picks up a pair of trousers. Then it stops and focuses on the keys beside his foot. We can obviously see that he has a financial problem. Gellis's character is very calm and collected. He has a very dry sense of humour. We begin to realise that he owes money to these two men. The camera then cuts to the next shot and shows him driving off in his car. We realise that this is the car he owes money for because he parks it behind a store. We begin to care for what happens to him later on, and we also wonder how he got himself into this sticky mess. ...read more.

This is a completely non-analytical, but incredibly detailed, description of the opening sequences of Sunset Boulevard, written in some of the worst grammar I have ever encountered. I have absolutely no idea what the author means to achieve by it, and couldn;t grade it if I tried!