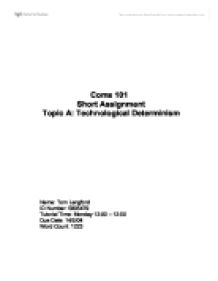 Coms 101 Short Assignment Topic A: Technological Determinism Name: Tom Langford ID Number: 5805479 Tutorial Time: Monday 12:00 - 12:50 Due Date: 14/5/04 Word Count: 1223 Technology is profoundly human, it is what separates us from our biological fore bearers. As a whole, human society has developed technology and to an extent controlled it. However one question you may ask yourself is do you as an individual control the technology around you or does that technology control you. This idea inspired the concept of technological determinism - the belief that technology acts as an independent force in our lives. Two more concepts that are very much related to this idea are the cultural lag concept and the convergence theory. Rudi Volti, an American sociologist is a scholar of these theories and his written the book Society and Technological Change. This book serves as a critical analysis of these theories. Technological determinism is the idea that technology is an autonomous force within our lives. If this concept is accurate then we are presented with the somewhat matrix-like proposition of humans being the servants technology rather technology serving us. This is not necessarily designed to be taken literally; it is not implying that we will all soon be at the mercy of some robotic task master. ...read more.

Closely linked to technological determinism is the theory of cultural lag. In layman's terms cultural lag is the concept that changes in society lag behind changes in technology. For example Volti gives us the example of medical technology decreasing the rate of infant mortality3. Prior to this, families were forced to have a large number of children to ensure they would have some surviving offspring. However after technology drastically improved an infant's chance of survival, it still took several generations before society adjusted and birth rates dropped. As a result there was a major population explosion. Cultural lag is closely related to technological determinism, cultural lag requires technology to be seen as independent. Therefore cultural lag is totally reliant on the concept of determinism. Volti states that this concept has three major flaws. He states that the theory does not take into account the fact that technology is also influenced by social change and that inventions are not just carried forward by their own logic. He believes it is therefore a mistake to believe technology is an independent source of social change. He also feels the theory is flawed through the fact that not all changes in society can be gauged. For example how can you measure changes in sexual morality? ...read more.