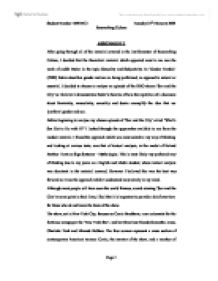 ASSIGNMENT 2 After going through all of the material covered in the last Semester of Researching Culture, I decided that the theoretical material which appealed most to me was the work of Judith Butler in the topic Sexuality and Subjectivity. In 'Gender Trouble' (1990) Butler describes gender and sex as being performed, as opposed to natural or essential. I decided to choose to analyse an episode of the HBO sitcom 'Sex and the City' as I believe it demonstrates Butler's theories of how the repetition of a discourse about femininity, masculinity, sexuality and desire exemplify the idea that we 'perform' gender and sex. Before beginning to analyse my chosen episode of 'Sex and the City' called 'What's Sex Got to Do with It?' I looked through the approaches available to me from the module material. I found the approach which was most suited to my way of thinking and looking at various texts, was that of textual analysis, in the model of Roland Barthes: Texts as Sign Systems - Mythologies. This is most likely my preferred way of thinking due to my years as a English and Media student, where textual analysis was dominant in the material covered. ...read more.

Charlotte adds a conservative comment about Carrie sleeping with someone after only two dates, which shows her clearly romantic side. * Samantha, the sexually free woman who claims to not be a 'relationship person', and is always hungry for more men then announces that she is in a relationship. The women looked shocked enough to hear this, but then Samantha adds that it is with a woman named Maria. She is quite calm when she says this but her body language could be read to be overly relaxed which shows she was nervous about how her friends would react even though she acts to them as if she doesn't care. * The next scene cuts to the camera in a following Carrie, Charlotte and Miranda as they walk home gossiping about Samantha's revelation. This is a very typical female thing to do, as gossiping is a cultural stereotype of women which is often applied by men, however women also realise they do it and can therefore ironically relate to the characters on screen. Gossiping exists with both men and women; however stereotypes have resulted in the cultural construction of gossiping as a female trait. ...read more.

What is sex without a relationship? Yet at the same time, Charlotte has proven that it is hard to have a relationship without sex. I believe this analysis supports Butler's findings about gender and sex. Surprisingly for the series, it is Samantha who best demonstrates Butler's ideologies of the subversion of culturally constructed identities, with her open view to homosexuality. The episode also emphasises how sex as an act, is quite clearly a culturally constructed idea which dominates the media and most aspects of everyday life. As a result, we believe sex to be intrinsic to our identities. We are penalised for having sex, or for having sex with certain people yet we are also penalised for not having sex. I also believe that textual analysis in the style of Barthes was the most appropriate way to examine the text as it allows you to analyse both the mise-en-scene as well as what is being said. I found it easy to conduct as I was fortunate to have the episode on DVD, however believe that it may not be so practical if watching on real time broadcast as it is harder to pause and make notes and therefore detailed observations. ...read more.