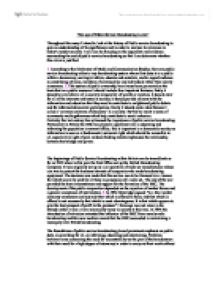 'The age of Public Service Broadcasting is over'.

'The age of Public Service Broadcasting is over' Throughout this essay I intend to look at the history of Public service broadcasting to gain an understanding of its significance and in order to analyse its relevance in today's modern society. I will also be focusing on the arguments and evidence surrounding the end of public service broadcasting so that I can determine whether this claim is justified. 1. According to the Dictionary of Media and Communication Studies, the term public service broadcasting refers to any broadcasting system whose first duty is to a public within a democracy, serving to inform, educate and entertain, and to regard audience as constituting citizens, members of communities and individuals rather than merely consumers. 2. This system of public ownership has always been promoted on the basis that as a public resource it should include four important features; firstly it should be available to all in society irrespective of wealth or location; it should cater for all of the interests and tastes in society; it should provide citizens with the information and education that they need to contribute to enlightened public debate and for informed democratic participation; finally it should create what Scannell called a 'common universe of discourse' in a society. By this he meant a sense of community and togetherness which help contribute to social cohesion. Certainly the last century has witnessed the importance of public service broadcasting. Particularly in Britain the BBC has played a significant role in educating and informing the population in current affairs, this is important in a democratic society as information is seen as a fundamental, universal right which should be accessible to all, especially in light of post-modern thinking which emphasises the relationship between knowledge and power. The beginnings of Public Service Broadcasting within Britain can be traced back as far as 1922 when in this year the Post Office set up the British Broadcasting Company. ...read more.

Numerous reports, government green papers and bills proposed to 'set free broadcasters from the narrow constraints of control' furthermore it was continuously argued that satellite, cable and a deregulated broadcasting system would be able to offer the public a greater choice of programmes more suitably in line with their wants through the competitive pressures of the market. The Peacock Report of 1986 was particularly influential in its argument that the broadcasting market should be opened up, and for many this alone signalled the end of public service broadcasting. In the past publicly owned broadcasting was appropriate as there could be no entry into the broadcasting market, yet now entry into broadcasting was possible. Digital technology permitted many more channels to be carried, both by traditional terrestrial transmitters and by satellite. With this communications revolution there was an increase in channels specialising in particular programme types, such as news, music or sport. It is thought that viewers of the future will be charged only for the programmes they watch in a pay per view system. Yet this ability to select and pay raises many questions. Why for instance would anyone continue to use generalist broadcast channels, and why should they pay for a majority of unwatched, unchosen programmes? Yet a greater question raised by this idea of pay per view is what about those who can not afford it, this is particularly significant for any democratic society which insists that everyone should have access to information no matter what their social status might be. Although the BBC is funded by licence fees and is independent of advertising revenue, change in the commercial broadcasting market has influenced the BBC's behaviour. The BBC undoubtedly strives to maintain high audience share believing that, should sufficient numbers of UK viewers and listeners cease to use BBC services, licence funding will loose its legitimacy. Certainly in the 1990s with the development of cable and satellite stations and their increasing consumption many commentators predicted that the BBCs share of the total UK market would hit a 'legitimacy barrier' below which public funding would no longer be defensible. ...read more.

Yet in most cases the new media did not replace the established media completely. For example radio and cinema have both survived television. The creation of the BBC as an independent body initially had the predominant aim of informing the public as a means of enabling them to make educated and rational decisions. Today this notion is still upheld and the BBC remains an institution people rely on for independent, impartial information. Moreover if universal access to information is so essential in terms of freedom and democracy why then is public service broadcasting under threat, surely in this sense its end can not be justified. It is in this context that the fate of public service broadcasting assumes an importance as it is often represented as the defence of the democratic ideal against the commercial one. Furthermore public service broadcasting is based on addressing its audience as citizens as opposed to consumers and therefore has a mandate to tell them what they want to hear as well as what they do not. Multinational corporations seeking to extend their media portfolios constantly see Public Service Broadcasting as an obstacle to their ambitions and so for many years now their pressure on government has been unrelenting. So perhaps what might be seen as the greatest hazard facing Public Service Broadcasting is the degree to which governments support it in the future and the degree to which governments concede to the demands of media corporations. Of course the future is unknown and so predictions as to the end of Public Service Broadcasting or to its continued importance deserve to be treated sceptically. Yet based on the sources I have read and in conjunction with my own assertions I conclude that there is no justification for abolishing or privatising public service broadcasting and I do not believe it will happen for quite sometime if indeed it does happen at all. Although I acknowledge that it is currently under attack I do not see that these threats have enough substance and support to bring about such a radical change. ...read more.