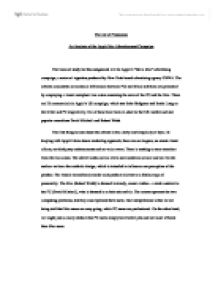 The Art of Persuasion : An Analysis of the Apple Mac Advertisement Campaign

The Art of Persuasion An Analysis of the Apple Mac Advertisement Campaign The focus of study for this assignment will be Apple's "Get a Mac" advertising campaign, a series of vignettes produced by New York-based advertising agency TBWA. The adverts concentrate on technical differences between PCs and Macs and these are presented by employing a visual metaphor: two actors assuming the roles of the PC and the Mac. There are 23 commercials in Apple's US campaign, which star John Hodgman and Justin Long as the MAC and PC respectively. Six of these have been re-shot for the UK market and star popular comedians David Mitchell and Robert Webb. The first thing to note about the adverts is the clarity and simplicity of style. In keeping with Apple's bare-bones marketing approach, there are no slogans, no ornate visual effects, no third party endorsements and no voice-overs. There is nothing to steer attention from the two actors. The advert works on two levels and combines science and art. On the surface we have the aesthetic design, which is intended to influence our perception of the product. The visuals immediately render each product relevant to a distinct type of personality. The Mac (Robert Webb) is dressed in trendy, casual clothes - a stark contrast to the PC (David Mitchell), who is dressed in a drab suit and tie. ...read more.

The use of such a large, precise figure is a very pointed attempt at scaremongering, and at giving that scaremongering some statistical substantiation. In truth, most computer viruses are quite malign intrusions that even the most rudimentary antivirus software will be more than capable of removing. This figure, coupled with PC's larger-than-life ill-health, is intended to make the audience believe that PC viruses are both rampant and devastating. This fact is also untrue, but as Sperber (ibid, p. 135), explains, our reliance on communication leaves us "vulnerable to misinformation, deception and misguidance". Mac responds to PC by saying, "PCs...not Macs." How one interprets this depends on the context on which it is considered. John Rogers Searle (1969, p.24-25) explains that, "Illocutionary and propositional acts consist characteristically in uttering words in sentences in certain contexts, under certain conditions and with certain intentions." Mac's response carries a lot of hidden meaning in these three words. His reply is subtle, and tinged with condescension. There is a definite suprasegmental effect in his voice, the implication that he is inviting us to join in a private joke at PC's expense. He is suggesting that Macs are immune to viruses, a suggestion similarly made when PC warns him to stay back and Mac replies, "I'll be fine." ...read more.

But there is no escaping from the message they seem to be promulgating: that Macs are too cool for anyone other than the people already using them. In that sense, the adverts play like an in-joke. As SLATE's Seth Stevenson asserts, "isn't smug superiority (no matter how affable and casually dressed) a bit off-putting as a brand strategy?" (Slate Magazine website, 2006). There is no denying the positive impact of wittiness in advertising. Bernard provides statistical evidence that "53 percent of ads that people think are funny or smart succeed, while 73 percent of ads that people think are boring fail." Here lies part of the advertising prowess behind the "Get a Mac" campaign: the acrimonious comparison between the two platforms is sufficiently masked in humour that it becomes palatable. When one tries to assess whether or not the campaign is a success, it seems at least intuitively valid to consider the timescale in which the adverts have been aired. In the US, the first advert premiered in May 2006, with more adverts airing on a monthly basis for the remainder of 2006. Apple reported a 39% rise in sales for the fiscal year ending September 2006, although numerous other factors and market forces could have had impacted on this. Apple's campaign comes at a crucial time when many PC users will be considering an upgrade to the new Windows Vista operating system, and this decision will be particularly pertinent due to the hardware compatibility implications of Vista. ...read more.