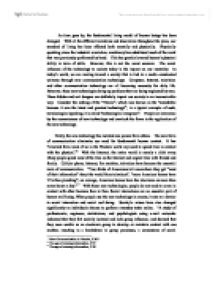 The convenience and problems of modern technology.

As time goes by, the fundamental living model of human beings has been changed. With all the different inventions and discoveries throughout the years, our standard of living has been affected both mentally and physically. Physically speaking, since the industrial revolution, machinery has substituted much of the work that was previously performed by hand. This has greatly lowered human's physical ability in term of skills. However, this is not the worst scenario. The worst influence of the technology to society today is the impact on our mentality. In today's world, we are moving toward a society that is tied to a media constructed universe through new communication technology. Computer, Internet, television and other communication technology are all becoming necessity for daily life. However, these new technologies bring up problems that are being neglected by man. These hidden and real dangers can definitely impact our society in an inconceivable way. Consider the sinking of the "Titanic", which was known as the "unsinkable because it was the latest and greatest technology"1, is a typical example of such, terminological speaking, it is called "technological arrogance". ...read more.

Television has replaced many natural experiences, "prime time has almost certainly become the most significant line of the evening, replacing the evening star or the sun sinking beneath the horizon".6 People are "changing their sleeping habits so they can watch television."7 Lots of people see "information ecology as a sort of substitute for the other, older, natural ecology."8 Additionally, many daily activities like shopping and banking are performed via television and the Internet, rather than the actual experience itself. In the essay "Participatory Media"9, written by Philippe Marx and John Palmer nearly a decade ago, they explained the potential of "Home Shopping" via catalogues, cable TV, phone lines, and through the computers. The Shopping Channel and countless online shopping opportunities prove this prediction to be highly accurate today. "If the shopping pattern of consumers becomes linked in any substantial ways to the use of communications technology form the home, there will be even more changes in marketing institutions, with many more traditional stores disappearing." 10 Technology has now become more of a service than just entertainment. Additionally, in the path that we are heading, technology threatens to jeopardize our privacy. ...read more.

The Federal Bureau of Investigations (FBI) developed the "Carnivore" in 2000. This program is able to sniff out emails for any illegal activity. These programs protect society through the violation of the individual's privacy. Privacy is loosing grounds in the battle against government interests. Looking at the world around us today, the telephone, the television set, the computer and its Internet access, new computer software and hardware surrounds us in every part of our lives. These luxuries have become a necessity. Although the "new technology" gives us many conveniences, it raises problems. Changes of lifestyles and values, loss of identity and loss of privacy are just few of the many problems that technology has granted upon our society. These problems are beyond the realm of human control. If we are to let this go on, humans will eventually lose their supremacy over technology. Both the individual and society will continue to depend on this ever-changing technology. We have a strong dependence on technology to communicate with others; this dependence will only get stronger with time. In turn, we are being "programmed" by the new technology. "Convenience always carries costs - this one may be worth paying, but it is high. ...read more.