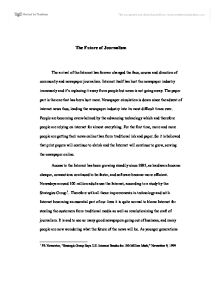 The Future of Journalism. For the first time, more and more people are getting their news online than from traditional ink and paper. So it is believed that print papers will continue to shrink and the Internet will continue to grow, serving the newspape

The Future of Journalism The arrival of the Internet has forever changed the face, course and direction of community and newspaper journalism. Internet itself has hurt the newspaper industry immensely and it's replacing it away from people but news is not going away. The paper part is the one that has been hurt most. Newspaper circulation is down since the advent of internet news thus, leading the newspaper industry into its most difficult times ever. People are becoming overwhelmed by the advancing technology which and therefore people are relying on internet for almost everything. For the first time, more and more people are getting their news online than from traditional ink and paper. So it is believed that print papers will continue to shrink and the Internet will continue to grow, serving the newspaper online. Access to the Internet has been growing steadily since 1995, as hardware became cheaper, connections continued to be faster, and software became more efficient. Nowadays around 100 million adults use the Internet, according to a study by the Strategies Group1. Therefore with all these improvements in technology and with Internet becoming an essential part of our lives it is quite normal to blame Internet for stealing the customers from traditional media as well as revolutionizing the craft of journalism. ...read more.

They need to increase their presence on the internet and meanwhile that would also reduce many of their costs. They would have less printed pages, move away from less profitable circulation and they could also outsource many of their functions including printing as well. The internet will also indirectly help them reduce their cost by allowing them to be printed out efficiently in the home, thus saving the costs of big presses, circulation departments and production departments. By definition, news has a short shelf life. So in many cases, consumers want to know about news as soon as it happens. That could be the kind of news that everyone wants, like the latest transfers in football or latest results, or it can be very personal, like one of your stocks just went way up or down, or the road you normally use to drive home from work is closed because of an accident. The fact is the consumer now wants to participate in deciding how and when they get each type of news and who they get it from. Technology has enabled people to get the kind of information you are looking for as soon as ever. By having your cell phone connected with internet or having a Kindle you will always be able to find what you are looking for in a minute. ...read more.

Every single newspaper article would be lost forever, and that is something our society cannot afford. There would also be economical effects. Many people would lose their jobs. The money that comes from them is very helpful for the economy and they are very reliable. There will not be anybody to make the print or the delivery anymore. I can imagine that there are many people who can't start drinking their morning coffee before the paper boy shows up. The internet it's just too heavy to read it with the morning coffee. The news media is in transition and it's hard to predict what will happen in the next few years with the newspaper industry but the chances are that passionate journalists and readers will not let the newspaper industry turn into a history. In my opinion I don't think that newspaper professionals should raise the white flag. All they need is a big push which would turn them more aggressive, form partnership with online newspapers, develop new properties and look after new ideas. Some media analysts are even considering this transition time as an exploding opportunity for many journalists to start their new era of journalism. But one thing is for sure. There aren't going to be 4000 newspapers companies any more and neither will there be ordinary journalists. Those who survive will be multi-channel skilled and they will be the pride of the journalism. ...read more.