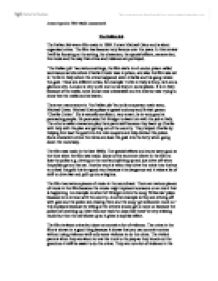 The Italian Job was a film made in 1969. It stars Michael Caine and is about organised crime. The film has become very famous over the years. In this review I will be focusing on the setting, the characters, the special effects, camera shot, the music and the way that crime and violence are portrayed.

‘The Italian job’ has various settings, the film starts in a London prison called wormwood scrubs where Charlie Croker was in prison, and also the film was set in Turlin in Italy where the crime happened when Charlie and his gang nicked the gold. These are different cities, for example Turlin in Italy is busy, rich and a glamous city. London is very quite and not as busy in some places. It is in Italy because of the mafia, to be known was unbeatable and the director was trying to show that the mafia can be beaten.

There are many actors in ‘the Italian job’ but only one person main actor, Michael Caine. Michael Caine plays a typical cockney and British person ‘Charlie Croker’. He is sexually confident, very smart; he is very good at persuading people. He persuaded Mr Bridger to back him with the job in Italy. The other smaller characters play their parts well because they back up Charlie with help with the plan and getting out of the country. They helped Charlie by helping him load the gold into the mini coopers and help distract the police. Some characters drove the minis and load the gold into the lorry when going down the motorway.

The film was made in the late 1960s. The special effects and stunts were good at the time when the film was made. Some of the stunts are clever in the film to lose the police e.g. driving on the roof and splitting up and just drive off when the police get out the car. Another stunt is when they drive the minis into the bus to unload the gold this is a good stunt because it is dangerous and it takes a lot of skill to drive fast and pull up into a big bus.

The film has various pieces of music in the soundtrack. There are various pieces of music in the film because the music might represent someone or an event that is happening. An example is when Mr Bridger enters the song ‘Britannia’ plays because he is in love with the country.Another example is they are driving off with gold and the police are chasing them and the song ‘get a bloomin move on’ this is played because its telling at the drivers should get a move on because the police are catching up. Matt Munroe track 'on days like these' is very relaxing music but then the car blows up so it gives a surprise effect.