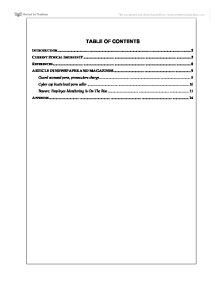 TABLE OF CONTENTS INTRODUCTION 3 CURRENT ETHICAL ISSUES IN IT 4 REFERENCES 9 ARTICLE IN NEWSPAPER AND MAGAZINES 10 Guard accessed porn, prosecutors charge 10 Cyber cop busts local porn seller 11 Beware: Employee Monitoring Is On The Rise 12 APPENDIX 15 Introduction Information technology has had an effect on private and public organization as well as on employees, customers, clients, and society as a whole and "as the number of computers increases, the magnitude of their impact on society increases" (p.116 Kizza, J.M). Indeed, everyone from living room to the boardroom of a company has been touched in some or other way by information technology. The impact of Information technology can be seen in every aspects of human life however, not everyone likes computers and information technology, and even those who do not like them at all times. Many people believe that humankind is threatened by the evolution of information technology in last two decade. In contrast we can say that information technology is essential to maintaining and supporting our culture, so we have symbiotic relationship with information technology therefore we must be aware of its effects on us as individuals and member of organization and as well as on society as a whole. Information technology has raised a multitude of negative issues and it raises many ethical issues ranging from pornography, privacy, accountability (responsibility in case of software crash) hacking, gambling, online scam, planned surveillance, censorship, illegal Copying of software programs surveillance of E-mail file etc. apart from these major issues few ethical issues deals with health and safety are also of major concern, as are the impact of Information Technology on employment levels and the quality of life of the people. Ethics is a branch of philosophy that deals with what is considered to be right and wrong. The one of the oldest codes of ethics, the Ten Commandments, (appendix 1) ...read more.

Mr. Gooden, 46, was indicted Friday on charges of theft and unauthorized use of county property. If convicted, he faces up to three years in prison. Prosecutor Mike Allen alleged Mr. Gooden gained access to the computers while working as a supervisor for a firm that is paid by the county to provide security at several offices. Mr. Gooden, of Coryville, is accused of using the computers after hours on Dec. 16 and Dec. 17 at the county's Department of Human Services. Mr. Allen said county employees were alerted to Mr. Gooden's activities when they noticed new icons on their computers. Many of those icons contained sexual terms. The employees clicked on the icons and discovered that someone had connected the computers to sexually explicit Internet sites. They reported it to the sheriff, who determined that the only people who had access to the building after hours were cleaning crews and security personnel. He said many of the computers were in areas that could be entered only with keys used by security officers. Prosecutors say the charge of unauthorized use of property applies to illegally accessing the computers. The theft charge was filed because a 16-channel radio supplied to him by the county was not returned. (SOURCE: - http://enquirer.com/editions/2000/03/04/loc_guard_accessed_porn.html) 2. The Cincinnati Enquirer Publication date: 11-19-97 Cyber cop busts local porn seller By Paul A. Long, Post staff reporter A Taylor Mill man, charged with peddling child pornography on the Internet, was nabbed by a New Hampshire cop who regularly patrols chat rooms looking for sexual activity. ''Our agency has decided to try to make the Internet a safer place,'' said James McLaughlin, a detective with the Keane, N.H., and police. ''We've made an investment to return some inhibitions to the cyberworld.'' For about an hour a day, McLaughlin goes online, talking to people, looking for those who are looking for pictures of naked children having sex. ...read more.