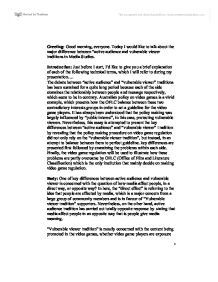 The major difference between &quot;active audience and vulnerable viewer traditions in Media Studies.

Greeting: Good morning, everyone. Today I would like to talk about the major difference between "active audience and vulnerable viewer traditions in Media Studies. Introduction: Just before I start, I'd like to give you a brief explanation of each of the following technical terms, which I will refer to during my presentation.... The debate between "active audience" and "vulnerable viewer" traditions has been sustained for a quite long period because each of the side examines the relationship between people and message respectively, which seem to be in contrary. Australian policy on video games is a vivid example, which presents how the OFLC balance between these two contradictory interests groups in order to set a guideline for the video game players. It has always been understood that the policy making was largely influenced by "public interest", in this case, protecting vulnerable viewers. Nevertheless, this essay is attempted to present the key differences between "active audience" and "vulnerable viewer" tradition by revealing that the policy making procedure on video game regulation did not only rely on the "vulnerable viewer tradition", but instead, in an attempt to balance between them to perfect guideline. key differences are presented first followed by examining the problems within each side. ...read more.

Nevertheless, there are problematic areas in both of the tradition. Firstly, the evidence in "vulnerable viewer tradition" cannot be account as an accurate and ultimate result due to the fact that there is not yet direct proof of cause and effect about the assumption that violent video games lead to desensitisation. Despite recent studies that have provided certain amount of evidence revealing this cause and effect relationship, these studies were conducted under limitation. For instance, Dr Anderson's study only embraced 225 college students aged between 18 to 25, which can be seem as a very confined group of players because game players aged between 5 to 18 remains a large proportion as well. In order to avoid the lack of narrowing and confining scientific research, the pre-regulation research project "Computer Games and Australian Today" is consisted of three parts: overview of the market and products; investigation in exploring the attractions of the games and player's views about the content; study of contemporary Australian uses of and attitudes towards computer games (OFLC Executive Summary: 1999). This nationwide survey, which involves both industry professions and ordinary young and adult game players, is in an attempt to balance the overestimated negative effect that concerns the "vulnerable viewer tradition". ...read more.

Vulnerable Audience Refers to those specific groups of people who are largely influenced/effected by the messages being sent out by media. Eg: teenagers, senior citizens, women etc. Active Audience Refers to those groups of people who do not take media messages for granted, in which the way these audiences perceive messages is contrary to Vulnerable Audience. OFLC Stands for "Office of Film and literature Classification" Structure Key difference between "Vulnerable Audience" and "Active audience" tradition - how people receive message Problems within each tradition Illustration: Australian video game regulation by OFLC (Office of Film and Literature Classification) Vulnerable Audience tradition: * Playing violent video games can increase aggressive behaviour * Dr Craig Anderson - examining two of the most popular video games that is currently available in US market - "Doom" and "Mortal Kombat" * Repeated exposure to violent images is desensitising * Kansas State's Murray -having the effect of rendering a person "less sensitive to the pain and suffering of others, and more willing to tolerate ever-increasing levels of violence in our society * A "monkey seeing monkey do" phenomenon * Car racing game is a predominant example * Leon James - theoretically people who play video games are more likely to repeat violent action in driving Active Audience Tradition * We choose media that reflect our values, tastes, interests and emotional need than behaviours and actions and beliefs" 7 7 ...read more.