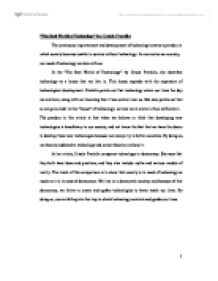 "The Real World of Technology" by: Ursula Franklin The continuous improvement and development of technology creates a paradox in which society becomes unable to survive without technology. As we evolve as a society, our need of technology evolves with us. In the "The Real World of Technology" by Ursula Franklin, she identifies technology as a house that we live in. This house expands with the expansion of technological development. Franklin points out that technology enters our lives the day we are born, along with not knowing that it has control over us. She also points out that as we grow older in this "house" of technology, we lose more control of our self control. The paradox in this article is that when we believe or think that developing new technologies is beneficiary to our society, and not know the fact that we have the desire to develop these new technologies because we always try to better ourselves. By doing so, we become addicted to technology and cannot function without it. In her article, Ursula Franklin compares technology to democracy. She says that they both have ideas and practices, and they also include myths and various models of reality. The intent of this comparison is to show that society is in need of technology as much as it is in need of democracy. We live in a democratic society, and because of this democracy, we thrive to create and update technologies to better assist our lives. By doing so, we are falling into the trap in which technology controls and guides our lives. ...read more.

We become so dependant on it to a point that we become isolated from society. Electronic democracy is an essential paradox in this article. Winner points out the fact that technologies such as television give us the freedom to access information at any time. However, we as a society are extremely attached to television to a point that we need a certain daily dose of television to feel satisfied. The Matrix In the 1999 production of the Wachowski brothers' "The Matrix", the world as we know it today has been destroyed by a catastrophic nuclear war that occurred between the human race and the machines. In the world that we live in today, humans are currently developing and producing artificially intelligent machines. These machines are designed to better assist humans to live a better and pleasant life. In the time setting of the Matrix however, artificially intelligent machines have turned against their creators. Humans now are being grown in huge amounts by machines, and they are being used to generate energy to power their colony of machines. These humans are plugged into an unseen computer system that simulates a virtual reality of the world that we are currently living in. This notion raises the question of realism. Those people who live in the matrix know nothing of the real world and the fact that they are being enslaved by machines. They are also living in a dream world where they are kept under control by the computer program. According to the definition of what's real; which is the things that we as human beings can see, touch, feel, and know, the humans of the matrix are not considered real human beings and do not exist. ...read more.

Conclusion Since we are living in a technologically advanced society, we experience and feel how technology affects our daily style of living. As we invent and upgrade technologies, we are under the assumption that we are enhancing our lives and the future. Technology has the power to affect us culturally, economically, and socially. These affects varies from one society to the other. The power that technology has over our society is immense. It creates cultural classes among societies. The wealthier class in society is more dependant on technology that those who are not. As technology becomes an inseparable part of our daily lives, we tend to grow to be alienated from the thing surrounding us. It essentially locks our mind into a box and we cannot free our mind easily because of our dependence on technology to live our lives. The amount of power that technology has in shaping our economical prosperity is enormous. In this day and age, societies are measured according to their economical wealth. Only those societies who are technologically advanced are considered economically wealthy. Technology has a considerable impact on our society. As technology evolves, new issues are raised that directly influence society. These issues include ethical and religious consequences. An example of the direct influence that technology has on our society is the idea of human cloning. Since we are developing this technology, we are faced with the notion that only god creates human beings and that it is ethically and religiously wrong. By totally depending on technology to assist us in living our live, we are slowly but surly shifting the power of control from our hands to technology. ...read more.