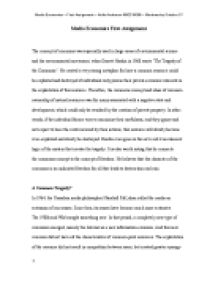 The Tragedy of the Commons - Examining the Free Internet

﻿Media Economics ? First Assignment ? Helle Andersen N00216066 ? Wednesday October 3rd Media Economics First Assignment The concept of commons was especially used in large areas of environmental science and the environmental movement, when Garrett Hardin in 1968 wrote "The Tragedy of the Commons". He created a very strong metaphor for how a common resource could be exploited and destroyed if individuals only pursue their private economic interests in the exploitation of this resource. Therefore, the commons concept and ideas of common ownership of natural resources was for many associated with a negative state and development, which could only be avoided by the creation of private property. In other words, if the individual farmer tries to maximize their usefulness, and they ignore and not expect to bear the costs incurred by their actions, this resource will slowly become over-exploited and slowly be destroyed. Hardin even goes so far as to call it an inherent logic of the system that creates the tragedy. It is also worth noting that he connects the commons concept to the concept of freedom. He believes that the character of the commons is an unlimited freedom for all that leads to destruction and ruin. A Common Tragedy? In 1964, the Canadian media philosopher Marshall McLuhan called the media an extension of our senses. Since then, its senses have become much more extensive. The 1980s and '90s brought something new. ...read more.

This is the beginning of destruction and resurrection in which Chris Anderson has emerged as one of the most influential prophets. He takes the theory further and manufactures the impact of digital distribution as a law: Because the cost consistent approaches zero, prices need to do the same. The future is free. Internet phenomenas are well known: Skype offers free telephony, Wikipedia free encyclopedia, Google free email - and then there are those who reluctantly have been forced to give their products away: newspapers, musicians, etc. Anderson rejects that you get what you pay for. That was the 'old free', while the 'new free' actually comes free of charge. One of the most well-known examples of the old free was Gillette, who gave his razors away and in return created a billion dollar business on razor blades. This is how most people think about free: A free phone paid for with subsciptions, free shipping is paid by the higher price of the product. But the new free is different, there?s no charge when you use Facebook and Wikipedia does not cost anything. Free is not a new invention. We know it from the supermarket where attention-hungry signs proclaiming 'buy one, get one free', and spruce sellers have used the free-trick for centuries. Usually the underlying premise is that a product is given away for free only to sell another, also called cross-subsidization. ...read more.

Critics forget that when companies like YouTube, Facebook, Gmail and yes, even Twitter, provides free services available to its users, it is because companies want to earn money by displaying ads. The search for profit is nothing to be ashamed of, it's what drives all the technological developments and results in its many amazing products and ideas. The future has no other way to go than back. We as customers and users, are still willing to pay for the things we want and like. The criticism about ads with online products and services only shows that we are willing to pay to get rid of the ads. Think of apps for smartphones. In most cases you can download a free version but you are constantly interrupted by insignificant ads. In most cases it will only cost you $0.99 to download the original version, which most customers eventually will do if they care enough about the product. Tragic, tragic - but is there a way out of tragedy? Hopefully, you?ll have to say. We are becoming increasingly interdependent, as we are connected and influence each other more global and more direct. The individual and local interests will increasingly coincide with the community - and with communications technology using what would be obvious to everyone. In short: the individual and the common dimension are moving closer together. The distance is shorter between egoism and altruism, between me and we. ________________ [1] http://www.wired.com/techbiz/it/magazine/16-03/ff_free?currentPage=all [2] ?The Tragedy of the Commons? Garrett Hardin 1968 ...read more.