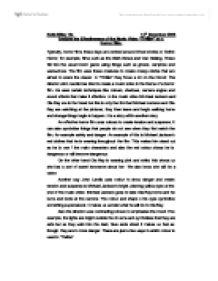 Analyse the Effectiveness of the Music Video “Thriller” as a

Typically, horror films these days are centred around Ghost stories or Gothic Horror, for example, films such as the Sixth Sense and Van Helsing. These fall into the usual horror genre using things such as ghosts, vampires and werewolves. The film uses these creatures to create creepy stories that are aimed to scare the viewer. In “Thriller” they focus a lot on the Occult. The director John Landis has tried to create a music video in the theme of a horror film. He uses certain techniques like colours, shadows, camera angles and sound effects that make it effective. In the music video Michael Jackson and Ola Ray are in the forest but this is only the film that Michael Jackson and Ola Ray are watching at the pictures, they then leave and begin walking home and strange things begin to happen. It is a story within another story.

An effective horror film uses colours to create tension and suspense, it can also symbolise things that people do not see when they first watch the film, for example safety and danger. An example of this is Michael Jackson’s red clothes that he is wearing throughout the film. This makes him stand out as he is one f the main characters and also the red colour shows he is dangerous or will become dangerous.

On the other hand Ola Ray is wearing pink and white, this shows us she has a sort of sweet innocence about her. We also know she will be a victim.

Another way John Landis uses colour to show danger and create tension and suspense is Michael Jackson’s bright, piercing yellow eyes at the end of the music video. Michael Jackson goes to take Ola Ray home and he turns and looks at the camera. The colour and shape o his eyes symbolise something supernatural. It makes us wonder what he will do to Ola Ray.

Also the director uses contrasting colours to emphasise the mood. Foe example, the lights are bright outside the cinema and symbolises that they are safe but as they walk into the dark, blue eerie street it makes us feel as though  they are in more danger. These are just a few ways in which colour is used in “Thriller”.

Another effective technique used in horror films is light and dark shadows, they are often used either to scare the viewer or create a sense of comfort. In general, light tends to represent safety whereas darkness is the symbol of the unknown. Shadows make the audience anxious and aware because they don’t know what is going to happen next. Evidently this is used when Ola Ray enters the derelict house and the zombies are lurking in the shadows and then they suddenly appear. This may cause the audience to jump in some cases and create and eerie effect.

Another place shadows are used is at the graveyard. The moonlight and clouds make them. This creates a much stronger atmosphere and makes the audience feel frightened.

An example of diagetic sound is when Ola Ray is screaming when Michael Jackson is turning into a werewolf. The scream makes us empathise, it makes us sit up and become aware. It’s a warning sound that is supposed to frighten us. It puts us in Ola Ray’s situation and helps us to feel how scared she is. The crunching of the stones beneath Ola Ray and Michael Jackson’s feet when they are walking along the path after the car has broken down is another example of a diagetic sound. This is the only sound we hear at the time and it is very quiet all around them. It makes us think that anything can happen to them at anytime. These few examples are evidence that sound effects are very important for horror films to be a success.

All the above media techniques create suspense in the horror film. They are used to create this tension and make the audience scared without actually saying what is going to happen. The colours, shadows, camera angles and sound effects all add to the suspense and if they were not used in the horror film it wouldn’t be as effective as it is.

Overall, the effectiveness of “Thriller” as a horror film is very dated. However in it’s time it was one of the scariest music videos around.  If a horror film was to be created like “Thriller” today it wouldn’t be very scary for the audience but however if the same techniques were used but to more of an advanced way it could still be very famous.