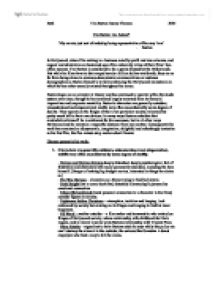 Tim Burton: An Auteur? 'My movies just sort of ended up being representative of the way I am' - Burton In Hollywood, where film making is a business ruled by profit and loss columns, and respect and admiration are bestowed upon film-makers by virtue of their films' box-office success. Tim Burton is considered to be a genius blessed by the Midas touch. But while his films have to date reaped nearly a billion dollars worldwide, they are as far from being slaves to common-denominator commercialism or audience demographics as Burton himself is to fully embracing the Hollywood mainstream in which he has rather uneasily existed throughout his career. ...read more.

Themes present in his work: 1. Characters are generally outsiders, misunderstood and misperceived, misfits very often encumbered by some degree of duality. - Batman and Batman Returns deeply disturbed, deeply psychological, full of frustration and characters with major personality disorders, including the hero himself. (Danger of making big-budget movies, interested in things he relates to.) - Pee Wee Herman - alienation as a theme trying to find his bicycle. - Dark Knight (not a comic book fan) disturbed alienated split personality emotional connection - Edward Scissorhands (most personal connection to a character in his films) outsider figures in society. - Nightmare Before Christmas - misception, isolation and longing. ...read more.

- He was moderately destructive as a child, ripping off heads of toys and terrorizing other children. - Would seek refuge in cinemas on his own watching horror films. Hammer Horrors - Sleepy Hollow, casting Christopher Lee from Dracula. - Huge fan of Vincent Price and actor - Vincent and Ed Wood - Price contributed the narrator in Vincent. 3. Symbolic icons in his films are recognisable. -black and white stripes are seen in almost every single one of his films - especially in clothing - Edward Scissorhands, Charlie & The Chocolate Factory etc. ?? ?? ?? ?? Beth Tim Burton Auteur Themes 2005 ...read more.

This is the beginning of an interesting analysis of Burton's style and thematic preoccupations. It raises some interesting points, but is somewhat lacking in detail.

I would have liked a much more considered analysis, for instance, of the strong role of childhood fantasy in all of his films, some attempt to approach exactly what it is that alienates his characters from "normal society".

I'd also have liked to have seen some reflection upon the relationship of the fantasies that drive Burton's films to their wider cultural context, specially the "dream factory" of Hollywood itself, if only because such an analysis might challenge the author's contention that Burton's dreamscapes are something radically new or different from the mainstream... I'm not saying it's a false hypothesis, I'm saying it needs a considered defense that is aware of the evidence to the contrary.

This brief list of lists is the skeleton of a good and insightful essay, but it is not yet that essay.