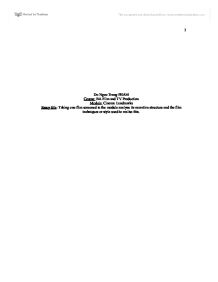 While most noir films conjure up images of terror in black-and-white settings, 'Leave Her To Heaven' manages to fall into the noir category despite its lush technicolor scenery and handsome interiors.

Essay title: Taking one film screened in the module analyse its narrative structure and the film techniques or style used to realise this.

'Leave Her To Heaven' (directed by John.M Stahl, 1945) was certainly regarded as one of the most successful noir films during the 40s for its very dark story but was depicted in glorious technicolour. The story with popular author Richard Harland (Cornel Wilde) meeting Ellen Berent (Gene Tierney) , an alluring woman on a train. Ellen quickly charmed Richard with her dazzling looks and strong personality; soon, despite her own engagement to a prominent lawyer, she proposes their marriage. The new couple move to Richard's secluded lakeside lodge, where they also had to take care of his crippled younger brother, Danny (Darryl Hickman). As the weeks go by, Ellen's near-obsessive love for Richard begins to brood anger, hatred and jealousy, culminating in the cruellest of acts.

The plot of 'Leave Her To Heaven’ is extremely complex, however, the narrative structure, the film techniques and style have intelligently used to deliver the whole message of the film to the audience.

'Leave Her To Heaven' starts with a man’s having just been released from prison. As he comes back, the local people react as if something terrible were happening. The whole story behind this man is then revealed by his lawyer through a flashback.

This is a very classic start in noir film, the audience is introduced to the dark world of crime, a world full of shadows and fears. The narrative structure of 'Leave Her To Heaven' is the conflict and resolution structure. According to Ken Fuson of the Des Moines Register, every story at its heart is a story of conflict and resolution and the story of 'Leave Her To Heaven' has established its conflict early and clearly. The conflict is that what happens to the successful author Richard Harland who is sentenced to a term in prison. The story then is unfolded with the flashback.

Also, the flashback is introduced with a little blur to notify the changes in time and place and the voice over in the background connotes that the story is told from the lawyer's point of view. The blur-editing is used wisely throughout the film in order to introduce jumps in time and changes in spaces. These help to get the storyline develop quickly.

The opening sequence of the lawyer's story is on the train where Richard sees a woman reading his book. She drops the book and Richard helps her pick it up. From that moment, the woman holds the gaze at Richard. A close up at the woman's face to emphasises her emotions but somehow is “mental” expression, the shot also focus on the gaze and shows tensions. The woman is reading Richard's book but does not recognise him , instead, she stares at him for his appearance, a resemblance of her deceased father. Later on, when they get off the train, he finds out that the woman, with her mother and sister, is back for her father's funeral. A close-up shot at her sister's face to establish the girl's interest in Richard. Throughout the film, there're quite a few close-up and mid-shot of Ruth – the woman's sister that also introduce Ruth's affair on Richard. For example, the sequence where Ruth plays the piano and when she is doing gardening in Back To The Moon. These are to explain Ruth's confess to Richard at the end of the film that she has always loved him.

As mentioned above, the family come back for funeral but Ellen, the woman, wears a fur coat while her mother and sister wear “normal clothes. Fur coat is the symbol of wealth and success but it seems not only inappropriate for funerals but also to hide the body and the characteristics of Ellen, something that is “different” from others.

In the story, Ellen is really different from others. She is a “psycho”, a mentally ill woman who “wants to have her husband – Richard all to herself at any price”[1]. The reason behinds this is never fully explained. However, the director did put in sets of  Hitchcock's point-of-view scenes to hint at her unusual behaviours. In one sequence, Ellen is riding around and around a hillside, her face is frozen with unreadable hauteur, stiffly disposing of her beloved father's ashes. The sequence is film as a point-of-view shot to establish that Richard is watching Ellen from a distance. This connotes that he is interested in her but has yet to get closer to her. There is another sequence when Richard is approached by both Ruth and Ellen, at the same place but the two are coming from different directions. Ruth approaches from above while Ellen approaches from below. A low-angle shot is used for Ruth's approach connoting her “angelic” and innocent characteristics while a high-angle but more likely a Richard's point-of-view shot is used to film this. The shot is to introduce Ellen's characteristics like a shark, unexpected and dangerous.

The conflict/resolution narrative structure of the film continually builds up conflicts about Ellen's mental personality and strange behaviours throughout the film. The film's narrative structure follows Tibetan Todovor's theory, starting from equilibrium, then disequilibrium (start from not wanting anyone to cook meals for her husband to getting rid of his beloved ones) and finally is the resolution of the problem (the ending). Of course, the film’s noir style did not fail to establish this. Rain and water are two classic elements in noir films and, they were widely used in 'Leave Her To Heaven'. Rain arrives to wash away any bad karma or spiritual residue that has been built up around the immaculate homes and set pieces depicted in the film. In terms of “water”, when Richard surprises Ellen by bringing her family members to their house, from the lake, her mother and sister appear making Ellen think as if they were sea monsters. Moreover, Ellen also kills Richard's brother by letting him drown.

In the killing scene, Ellen's dressing code tells it all. Ellen wears a pair of sunglasses, a bathing robe concealing her athletic body and perhaps true feelings to the brother. However, later on she puts the dark glasses on revealing the dark and mental side of her. Talking about Ellen's clothes, in the beginning, Ellen's body and characteristics were hidden under her fur coat but later on, at the swimming pool scene, the body is displayed in body hugging swimsuit and so are her characteristics. Ellen's personality is also constantly changing with changes in her costume. In the sequence happening in Back to the Moon, Ellen changes a number of outfits over the course of one day. From sexy to virginal white sleep wear in early morning to domestic, girl-next-door denims, from plaid shirt at breakfast to sophisticated, coordinated city silky trousers and blouse in the afternoon to a light blue jersey dress for evening and a satin dressing gown for the bedroom. This shows that in the morning, Ellen portrays as a nice and lovely wife, she then transfer to a lively girl who is good at housework and is friendly with her husband's loved ones. Her outfits are disguises, differing parts of her character. Then there's the “pregnancy” sequence when her fashion ranges from the aquarium pregnancy wear to a “blood red” swimsuit after her baby's death. Red stands for blood, death and evil spirit and that Ellen wears red, again, implying her evil personality. In other words, the clothing code plays an important role in revealing Ellen's personality and her mental illness. The clothes she dresses implies the role she wants to play in front of her husband.

While most noir films conjure up images of terror in black-and-white settings, 'Leave Her To Heaven' manages to fall into the noir category despite its lush technicolor scenery and handsome interiors. The fact that 'Leave Her To Heaven' was made in technicolor helps to tell the storyline a lot. “No one can watch this without remembering Gene Tierney's searing green eyes”[2]  and her red lips. Green stands for jealousy while red connotes evil-ness, therefore, without technicolour, we would not be able to see the special characteristics that portray Ellen. There are visual motifs here that keep returning like bits of recapitulated music, especially the image of water surrounded by trees and the cool technicolor greens slashed by the red of Ellen's fire-engine lips.

Joseph McGinty Nichol once said that “There're two elements that go into filmmaking. There's sound and there's the picture”. A film cannot tell the story throughly without sound. Even in silent films, there's soundtrack to express the emotion of the characters. 'Leave Her To Heaven's sound does contribute a lot in helping the audience to realise the narrative and the characters' characteristics. The sound works alongside the structure to build up the whole storyline. For example, the sequence where Ruth is playing the piano. The angelic music displays Ruth's beautiful personality and portray a romantic atmosphere between Ellen and Richard. Next, there is a scene where Ellen's fiancée comes to her house. The dog starts barking and then the background music becomes spooky. This is to imply the characteristics of the lawyer. Normally, when a dog starts to bark, it connotes that something bad and terrible is about to happen. The smoky music tells the audience the lawyer's evil characteristics. During scene when Richard’s brother dies, there is no sound at all. The silent atmosphere is designed to emphasise on Ellen, a woman who is full of jealousy. Later on, when Ellen wants to get rid of her baby, the smoky music appears once again to imply a terrible intention. And after that, the music is pleasurable to establish her mood, which is satisfied and happy.

Films endue narrative with interesting new possibilities of point of view manipulation, since they have not one but two co-temporal information channels, visual and auditory. To sum up, in 'Leave Her To Heaven', the narrative structure, the film techniques and style are wisely used to deliver the story.

According to Seymour Chatman, narratives are communications from filmmakers to the audience. In this movie, the director focuses our attention on an ostentatious window above the witnesses' heads that is surely meant to be Ellen's Cyclops-like eye watching over her own diabolical handiwork. This is a film that exists in some floating subconscious state where any behaviour is allowed, where fear and helplessness are inevitable.

However, the contrast between visual brilliance and psychosis enhances the horror[3]. With gorgeous technicolor of the era of romantic films and stars, it still holds up as one of the better ones of its time. Thanks to the glorious use of technicolor, the film looks beautiful from the beginning to the end and is a superb example of the use of Technicolor. The film is was shot in technicolor, which makes it stand out from a lot of other pictures released around the time this was made. The atmosphere is constantly foreboding, especially early on as Tierney hints at a darker side to her character.