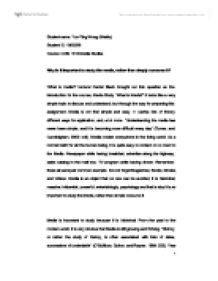 Why is it important to study the media, rather then simply consume it?

Student name: Yun-Ting Wong (Waldo) Student ID: 1902226 Course: COM 1010 Media Studies Why is it important to study the media, rather then simply consume it? 'What is media?' lecturer Daniel Black brought out this question as the introduction for the course, Media Study. 'What is Media?' it looks like a very simple topic to discuss and understand, but through the way for preparing this assignment, Media is not that simple and easy. It carries lots of theory, different ways for application, and, a lot more. "Understanding the media has never been simple, and it is becoming more difficult every day" (Turner, and Cunninigbam, 2002: xvii). Media consist everywhere in the living world. As a normal habit for all the human being, it is quite easy to contact or connect to the Media. Newspaper while having breakfast, advertise along the highway, sales catalog in the mail box, TV program while having dinner. Remember, these all were just common example. Do not forget Magazines, Books, Movies, and Videos. Media is an object that no one can be avoided, it is historical, massive, influential, powerful, entertainingly, psychology and that is why it is so important to study the Media, rather then simple consume it Media is important to study because it is historical. ...read more.

Behind the advertise, how many of those customers will consider the cost or the problems will be created after buying the product? "Advertising is another powerful influence on commercial media. Advertisers influence what types of stories are presented. But more deeply, advertisements themselves shape people's views of the world. They are a pervasive source of unreality, fostering insecurity and consumerism." (Martin, 1998:8). Media can be influencing tool because it is powerful. Media is important to study because it is powerful. When citizens reading the newspaper, watching the news or enjoying the TV program like 'Big Brothers', audience seldom discuss weather the context is sensible or not. Although some of the substance in the TV program or some of the report in the news are not satisfy with their way of thinking, but it will be totally disappeared in people's mind immediately. "This context is all the more powerful because it is neither stated nor discussed. Even the "facts" that are presented are often wrong or misleading. Powerful groups, especially governments and large corporations, shape the news in a range of ways, such as by providing selected information, offering access to stories in exchange for favorable coverage, spreading disinformation, and threatening reprisals." ...read more.

"The alleged power or influence of mass media has lead to extensive studies of media effect in areas ranging from political campaigns to portrayals of violence, pornography, racism and women. Governments and political parties have focused on the mass media as sources of powerful influence." (Macnamara, 2003:2) Those internet suffer and game lovers may be addicted to the media entertainment in result affected the academic, work, even the relationship with family and friends. "Video and computer games have commonly been thought to be addictive where the player cannot stop the repetitive play" (Turner, and Cunninigbam, 2002:267) In conclusion, Media is an important and essential element that can not be omitted in the world. Media is always young, it adapts the everyday changing world and it leads the trend. Media provide a benchmark for the quality of life. Media brings information, a space for entrainment. Media helps to enlarge the relationship between people. Unfortunately, Media also cause problems, misleading, addicted, and miss-educated. Government should control those Media source and Media companies should have self discipline. Reference List Brian Martin, Information Liberation, London: Freedom Press, 1998 Cunningbam, Stuart, and Turner, Graeme, 2002, The Media and Communication in Australia, Allen & Unwin, Australia: S.A. Macnamara, 2003, Mass Media Effects , CARMA International(Asia Pacific) Pty Ltd Australia, NSW O'Sullivan, Dutton, Rayner, 1994, Studying the Media (2nd Edition), United States of America by Oxford University Press, Inc. ?? ?? ?? ?? 1 ...read more.