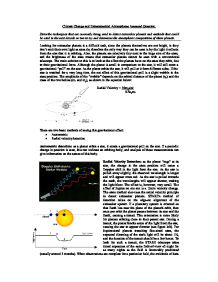 Describe techniques that are currently being used to detect extrasolar planets and methods that could be used in the next decade or two to try and determine the atmospheric composition of these planets.

Climate Change and Extraterrestrial Atmospheres Assessed Question. Describe techniques that are currently being used to detect extrasolar planets and methods that could be used in the next decade or two to try and determine the atmospheric composition of these planets. Looking for extrasolar planets is a difficult task, since the planets themselves are not bright, ie they don't emit their own light as stars do, therefore the only way they can be seen is by the light it reflects from the star that it is orbiting. Also, the planets are relatively tiny next to the huge size of the stars, and the brightness of the stars means that extrasolar planets cannot be seen with a conventional telescope. The main solution to this is to look at the effect the planets have on the stars they orbit, due to their gravitational force. Although the planet is small in comparison to the star, it will still exert a gravitational "pull" on the star. As the planet orbits the star, it will pull at it from different sides. ...read more.

This orientation is more likely for planets orbiting close to their parent star. During a transit, the planet blocks some of the light from the star, causing the star to appear dimmer (see figure left). For Jupiter-sized planets transiting Sun-sized stars, the expected dimming of the star's light will be about 1%, and the duration of the transit should be a few hours. To look for such a transit, the STARE telescope takes timed exposures of the same field-of-view all night for as many nights as the field is favourably positioned (usually around 3 months). When observations are complete for a particular field, the multitude of data are run through software which, after correcting for many sources of distortion and noise, produces light curves (see left) for thousands of stars in the field. Other software is run to analyze the processed data for variable stars and transit candidates. It takes two or more transits (or cycles in a variable star) ...read more.

Spectroscopic Analysis of Planetary atmospheres: this is a difficult technique because light reflected from the planet must be analysed without the light from its parent star. Only direct methods of planet detection are suitable for obtaining these observations. In the future, large systems employing coronagraphs (observe solar atmospheres, and allow calculation of temperature, density and velocity of solar clouds, which can therefore be removed from the relevant information), apodization (mathematical technique which reduces the spurious ringing around sharp edges known as Gibbs Ringing), and supersmooth mirrors with diameters ?10m may allow full characterization of the temperature, pressure, atmospheric composition, etc., of extrasolar planets. These large-aperture instruments may be monolithic but will most likely be composed of multiple phased elements. Therefore, additional technologies involved in stabilization of the point spread function of a multiple-element telescope will be needed. Another alternative is an optical aperture synthesis interferometer, which may be sufficient to achieve sub arc second resolution sufficient to isolate the planet from the star. Stellar light can be suppressed by apodization and precise positioning of the star in a null of the interferometer. ...read more.