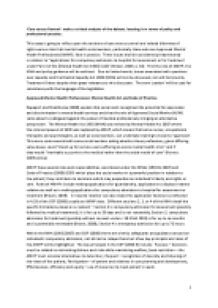 Care versus Control: make a critical analysis of the debate, locating it in terms of policy and professional practice fo Approved Mental Health Professionals.

﻿?Care versus Control?: make a critical analysis of the debate, locating it in terms of policy and professional practice. This essay is going to reflect upon the tensions of care versus control and related dilemmas of rights versus risks that mental health social workers, particularly those who are Approved Mental Health Professionals (AMHP), face in practice. These issues shall be considered predominantly in relation to ?applications for compulsory admission to hospital for assessment or for treatment under Part 2 of the [Mental Health Act 1983] (s13)? (Brown, 2009, p. 63). First the role of AMHP, the MHA and policy guidance will be outlined. Due to limited words, issues associated with questions over capacity and the Mental Capacity Act 2005 (MCA) will not be discussed, nor will Community Treatment Orders despite their great relevance to this discussion. The term ?patient? will be used for consistency with the language of the legislation. Approved Mental Health Professional, Mental Health Act and Code of Practice Rapaport and Manthorpe (2008) explain that social work recognised the potential for oppression and discrimination in mental health services and that the role of Approved Social Worker (ASW) came about to safeguard against the power of medical professionals, bringing an alternative perspective. The Mental Health Act 1983 (MHA) was revised by Mental Health Act 2007 where the role and powers of ASW was replaced by AMHP, which means that some nurses, occupational therapists and psychologists, as well as social workers, can undertake training to become ?approved?. This was a controversial with some social workers asking whether these professions, given differing value bases, could ?stand up for service users suffering an acute mental health crisis? and if they would ?inevitably succumb to the medical rather than the social model of care? (Hunter, 2009:online) AMHP have several roles and responsibilities, sanctioned under the MHAs (1983 & 2007) and Code of Practice (2008) (COP) which place the social worker in a powerful position in relation to the patient; they contribute to decisions which may jeopardise an individual?s liberty and rights or care. ...read more.

treatment should only be where the patient has ?significantly impaired decision-making capacity? and the use of compulsory powers must have a therapeutic benefit for the patient. They argue that The purpose of mental health legislation should not be to detain people with mental health problems for whom no beneficial treatment can be found, and where no health benefit may result. It is also important to note the point that Yanni (2009:342) makes within his conclusions that care and control are not always opposed in the role of an AMHP, ?the former is sometimes only facilitated by use of the latter.? It is widely recognised that there are situations where there is necessity for detainment. Compulsory treatment (which can have severe ?side? effects) may be seen as more controversial, but even so there remains wide spread support or perceived ?need? for this also demonstrated by the relatively high numbers of Community Treatment Orders (The NHS Information Centre, 2010). ?The dilemma for social work ? is to determine the point at which the balance should swing from self-determination to protective intervention? (Braye, 1992:55). This is done through risk assessment, which leads us to a central part of this debate. Risk (versus rights) As mentioned above when looking at the MHA and COP, compulsory admission is largely based on assessment of risk - to self, others and perhaps even the risk services (including admission) poses; AMHPs complete risk assessments in the context of the values of the profession, social and political views and pressures and legislation. It is widely recognised that over the past decade society has generally become more sensitive to risk, with risk assessments, risk management, minimisation et cetera becoming common place. Golightley (2004:23) notes, ?Even though the risk of a stranger who is mentally ill killing you is very small, some press coverage suggests that it is a common occurrence?; portrayals in the media of relatively rare tragedies as something that we may all have to fear, contributes to culture of precaution and attempts to eliminate risk. ...read more.