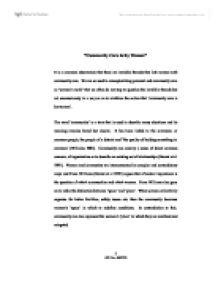 &quot;Community Care Is By Women&quot;

"Community Care Is By Women" It is a common observation that there are invisible threads that link women with community care. We are so used to conceptualising personal and community care as 'women's work' that we often do not stop to question the invisible threads but act unconsciously in a way so as to reinforce the notion that 'community care is by women'. The word 'community' is a term that is used to describe many situations and its meaning remains broad but elusive. It has been linked to the commons or common people, the people of a district and "the quality of holding something in common' (Williams 1983). Community can convey a sense of direct common concern, of organisation or to describe an existing set of relationships (Bornat et al 1997). Women and community are interconnected in complex and contradictory ways and Fiona Williams (Bornat et al 1997) argues that of central importance is the question of which communities and which women. Fiona Williams also goes on to make the distinction between 'space' and 'place'. When women collectively organise for better facilities, safety issues etc. then the community becomes women's 'space' in which to redefine conditions. In contradiction to this, community can also represent the women's 'place' to which they are confined and relegated. Community care is often viewed as care being provided by the family, which tends to amount to care by women, (Thompson 1993) and common ideology, leads us to believe that it is 'natural' for women to be carers. ...read more.

in 1977 famously pronounced on television: "If the good Lord had intended us all having equal rights to go out to work and to behave equally, you know he really wouldn't have created man and woman" (Franks 1999). It must be pointed out that at the time of making this observation that, for two years, he had been serving the Conservative party's first female leader! Another prejudice based on myth is illustrated by American doctor, Edgar Berman, in 1970 saying that women were unfit for leadership because of their "raging hormonal imbalances"(The Bristol Women's Studies Group 1979). The ideological assumption that caring is primarily a female role is, some sociologists argue, a behaviour learnt by males and females within their society. Ann Oakley (Haralambos&Holborn 1995) believes that gender roles are culturally rather than biologically determined and that, apart from childbearing, no tasks are exclusively female. Oakley goes on to identify how gender roles are shaped from an early age by means of manipulation, canalisation i.e. through play, use of language and different activities i.e. household tasks. Linda Birke argues that "women's biology actually and materially affect their lives" (Haralambos&Holborn 1995). Birke did recognise, though, that human behaviour is influenced by the cultural interpretation placed on biological differences. The norms, values and roles that are culturally determined are then socially transmitted. As long, then, as the sexual division of labour is such that men and women do very different kinds of jobs, so little boys and girls will imitate those patterns of behaviour. ...read more.