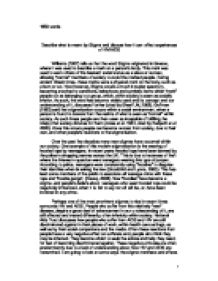 Williams (1987) tells us that the word Stigma originated in Greece, where it was used to describe a mark on a person’s body. This mark was used to warn others of the bearers’ social status as a slave or outcast, allowing “normal” members of society to avoid the marked people. During ancient Greek times, these marks were a physical mark on the body, such as a burn or cut. Now however, Stigma covers a much broader spectrum, becoming attached to conditions, behaviours and symbolic items which “mark” people out as belonging to a group, which, within society is seen as socially inferior. As such, the word has become widely used and its concept and our understanding of it, discussed further (cited by Sheaff, M, 2005). Goffman (1963)said that stigmatisation occurs within a social environment, when a person is found to deviate from the realms of what is seen as “normal” within society. As such these people are then seen as incapable of fulfilling the role(s) that society dictates for them (Jones et al. 1984, cited by Redpath et al 2005). Once this occurs people can become outcast from society, due to their own, and other people’s reactions to the stigmatisation.

Over the past few decades many new stigmas have occurred within our society. One example of this modern stigmatisation is the wearing of hooded tops by teenagers. In recent years hooded tops have been banned by the police in shopping centres across the UK. This is due to instances of theft where the thieves in question were teenagers wearing this type of jumper. According to police, teenagers were consistently using “hoodies” to disguise their identities when breaking the law (Goodchild and Lyons, 2003). This has lead some members of the public to associate all teenage crime with these tops and “hoodie gangs”. (Razaq, 2006). Now “hoodies” have become a stigma, and people’s beliefs about teenagers who wear hooded tops could be negatively influenced, when it is fair to say not all will be, or, have been involved in any crime.

Perhaps one of the most prominent stigmas to rise in recent times surrounds HIV and AIDS. People who suffer from this relatively “new” disease, despite a great deal of advancement in our understanding of it, are still affected and treated differently, often inferiorly within society. National Aids Trust discusses how people who suffer from AIDS and HIV are still discriminated against in their places of work, within health care settings, as well as by their social companions and the media. Often these reactions from people have a very negative effect on sufferers and, people who think they may be infected. They become afraid to seek the advice and help they need, for fear of becoming discriminated against. These negative attitudes are often predominantly due to a lack of understanding about how HIV and AIDS are transmitted. I am going to look at some ways the stigma manifests and affects people, personally and within health care and work settings due to this lack of knowledge.

There have been studies regarding the negative attitudes of some health care workers and how this affects the levels of care towards HIV and AIDS sufferers.  Robinson (2006) discusses how health professionals’ attitude to people with HIV and AIDS is often very negative. They sometimes view working with these patients differently to other patients, occasionally avoiding working with them altogether, and causing patients to feel isolated and unwanted. This is often caused by a lack of competent understanding of how the disease is carried and passed on, making the fear of infection influence treatment of the patient. Although she does highlight the negative findings her research brings to light, she also talks about Tierney (1995) whose research showed that some types of HIV nurse education was being viewed very positively, helping to improve and alter negative attitudes towards these patients (cited by Taylor, 2001). This supports the idea that a lack of knowledge and understanding of both HIV and AIDS is creating negative attitudes, thus preventing the stigma from becoming extinct. Therefore, if more information and mandatory teaching was enforced for health care workers and professionals, this could go someway towards changing these negative attitudes in healthcare settings permanently, improving the quality of care for any sufferer’s and possible sufferer’s. Taylor (2001) also echoes this sentiment, speaking of Health care professionals being in a prime position to give sufferers of HIV and AIDS positive experiences. She goes on to say, this does not have to stop within the health care setting, but could spread into the public domain, helping to educated and inform the public about the disease. This could work towards decreasing the negative stigmatisation surrounding these diseases, helping to improve individual sufferers’ experiences.

It is not just within health care settings that people infected with the HIV and AIDS virus experience difficulties due to Stigmatisation. Under the disability discrimination act (amended 2005) it is illegal to discriminate against people with HIV after the point of diagnosis. However, this has not eradicated the issues that have arisen due to the initial stigma. People still find that due to the lack of knowledge about how the virus is transmitted, they are still being discriminated against at work (National Aids Trust 2006). Taylor (2001) discusses an individual sufferer of HIV’s personal experience of applying for a job before the disability discrimination act was amended in 2005. Before applying they needed to know if they had to declare they were HIV positive on the application. However, there were no policies in place to ensure this information would be kept confidential, and that the employer, insight of this knowledge, would not let it affect the application process. The applicant said that thinking about the application induced “fear of rejection” in them. Not only because other people may learn that they are infected with the HIV virus, but also, the possibility that their chances at a job for which they were qualified could be limited. On the National Aids Trust website, there are examples of individual cases where this discrimination has forced people out of their jobs. One case involved a male chef who disclosed his condition to the manager in private. The manager in question proceeded to inform other members of staff about the Chef’s condition. People started to avoid him, causing him to become isolated and unable to complete his work properly. The manager was ensuring everything the chef touched was cleaned repeatedly, suggesting ignorance of how the infection is carried. These actions caused the chef to become withdrawn and depressed. Despite the legal legislation in place, this employer was still discriminating against their employee.

Over the past decade Faye Macrory has been pivotal in helping to educate people about women’s rights surrounding pregnancy after being diagnosed with HIV. Before this there was very little support in place for these women. It was viewed unacceptable by many, for people who were drug abusers, or infected with HIV to have babies and they were placed into care. The initial negativity surrounding this has proved difficult to over come, in terms of the media, the public views and critically midwives and other medical staff (Jackson 2003).In Crossley’s research (1998b), he discusses personal experiences of HIV and AIDS, and how this has affected the individual. Alcia is a 39-year-old lady who is HIV positive. She discusses how previously she and her partner wanted to have children. Although she is aware that this is still a possibility, and knows that the risk of infecting the child are limited, Alcia believes that it would be “pretty selfish” to have a child, even though she believes she has ”lost out”. It is not stated that the negative media and feeling surrounding this matter had any impact on Alcia, perhaps if there had been more positive information regarding the subject available within the public domain sooner, the stigma surrounding it would not have escalated so far and people may view this matter more openly.

In conclusion it is clear from the personal experiences of the people discussed above, that discrimination, despite all the legalities in place, still features heavily in the lives of people diagnosed HIV positive or with AIDS. In most cases this appears due to a common misunderstanding of how the disease is transmitted. This may be due to lack of information available in the public domain for employers, friends and family members. Also it could be suggested that there is not enough training and educating for health professionals to ensure all patients receive the same level of care. It is also possible these negative attitudes and behaviours could link to what psychologists refer to as the Halo effect. If the first impressions people receive are very negative then an immediate impression is formed based on this. People then choose to look for information that supports their initial view instead of choosing to change their attitudes in the face of opposing evidence (Western 1999).In the early 1980’s when the 1st cases of AIDS hit the headlines in the UK, despite a huge lack in knowledge of the disease, the articles and headlines were very damning and accusing. The Daily Express ran the headline:

AIDS: Why should the Innocent Suffer?

This was used in context with people who were receiving infected blood via blood transfusions, implying that people who contracted HIV through this manner were innocent, but people who contracted it via sexual methods were guilty. These negative implications from the media could have helped to reinforce any initial doubts surrounding a disease people knew very little about. This negative feeling could then have snow balled, strengthening the stigmatisation that was already occurring around the disease. Should this be the case it could take some time to reverse these first impressions, and for society to view HIV and AIDS in relation to all existing research.