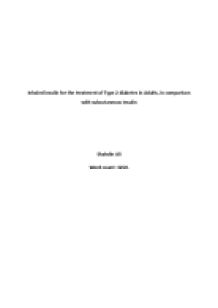 ﻿Inhaled insulin for the treatment of Type 2 diabetes in Adults, in comparison with subcutaneous Insulin Shahdin Ali Word count: 3259. Inhaled insulin for the treatment of Type 2 diabetes in Adults, in comparison with subcutaneous Insulin Introduction Diabetes is a common disorder which affects around 180 million people and results in 2.9 million deaths per annum. It has been suggested that mortality rate is likely to rise by 50% in the next decade (Yadav et al., 2009). In the year 2004, around 33,000 deaths were caused by diabetes alone in UK (Carlsson et al., 2004). In addition, WHO projects that diabetes death will double between 2005 and 2030. Management of type 2 diabetes typically commences with diet and lifestyle interventions, eventually followed by the addition of a single oral anti-diabetic drug and then a combination of oral drugs. However, oral therapy is often not sufficient to achieve appropriate glycaemic control of less than 7% (Tarnow et al., 2008). Current guidelines recommend that treatment should aim to achieve a blood level of glycated haemoglobin (HbA1c) of between 6.5% and 7.5%, although it is acknowledged that such targets may not be achieved in all patients. Data from the Kaiser Permanente databases suggested that only half the patients achieve targeted glycemic control when using the combination of sulphonylurea and metformin. Furthermore, even when successful, these patients maintained target control for less than one year (Brown et al., 2010). The prevalence of diabetes is reaching epidemic proportions with an increasing need for new therapies. It is imperative that diabetic patients who fail to achieve satisfactory glycaemic control are treated more effectively. Data from UK prospective diabetes study and the diabetes intervention study have revealed an association between good glycaemic control and reduction in micro-vascular and macro-vascular complications on type 2 diabetes (UKPDS, 1988) Several new therapies are in development and amongst these is inhaled Insulin. Inhaled insulin (INH) ...read more.

In the study by Skyler et al, inhaled insulin had a comparable incidence of hypoglycaemia to subcutaneous insulin In addition, in a long term extension study of Exubera 111 program conducted by Quattrin et al., (2004) changes in lung function initially observed remained small and non-progressive. Critical Analysis 2: A randomised controlled study was conducted by Royle et al., in 2008 to assess the patient acceptability of a combination of short acting inhaled insulin and long acting inhaled insulin in comparison with a combination of short acting injected and long acting injected insulin. People with either type 1 or 2 diabetes were considered for this study and only randomised controlled trials with parallel groups and controlled cross over trials were considered eligible for this study. Around 1191 participants were in six trials; 735 had type 1 and 456 had type 2 diabetes. The mean age of people with type 1 diabetes was 34years, and mean age of those with type 2 diabetes were 56years old. It is difficult to comment on generalisation because several of the studies gave little or no details of patients recruited. The average ages of the type 2 patient in the study was 56, which may be representative of type 2 patients treated with insulin (Royle et al., 2008). The accuracy of the result is reduced by the large number of exclusion criteria, it should be noted that one of the main reasons for exclusion is asthma, which has been reported in Europe to be less common in people with type 1 diabetes than the general population (EURODIAB, 2000). There does not appear to be any evidence of increased risk of harm in people with both diabetes and asthma, and their exclusion is presumably only on the grounds of caution. However the bioavailability of inhaled insulin might well be affected if asthma led to bronchoconstriction, and this would need to be assessed. ...read more.

If inhaled insulin is to become a viable clinical option, longer term data on pulmonary safety and efficacy will be needed. Also, the marginal price and dosage required compared to subcutaneous insulin will be critical in determining whether it will be an economically viable alternative. In future, research could be divided into safety, efficacy and economics, for safety purposes we need long-term- follow up ( Ie years and not months) of large numbers of patients who use inhaled insulin (Royle et al., 2009). Large observational cohort studies would suffice for efficacy purposes, we need more studies which have the same basal insulin in both the inhaled and control groups, and it would be useful to use both short acting and long acting analogues in these. Inhaled insulin is currently contraindicated in patients with asthma and other respiratory disorders, during pregnancy and in children (Becker et al., 2006). Greater caution is required in young children where the lung is still growing, and perhaps trials should be done first in the adolescent group, where many have poor control, which may cause long lasting damage needed. For economic analysis, it is important to include cost and quality of life data in future RCTs as the main gain from inhaled insulin is the quality of life. An economic analysis proposed by the manufacturers of Exubera suggests that treatment of inhaled insulin is cost effective in the long term (Black et al., 2007). The benefits are likely to be due to better adherence to treatment and reduced risk of long term complications. The demand for inhaled insulin will place a considerable burden on the healthcare economy. NICE has recommended further research to establish the safety of inhaled insulin the long run and there are ongoing clinical trials related to this guidance include the Exubera real world classic study, which aims to assess the impact of inhaled insulin on glycaemic control in people with poorly controlled type 2 diabetes receiving two or more oral anti-diabetic agents (NICE, 2008). Once the work has been done, it won?t be long before inhaled insulin becomes reality. ...read more.