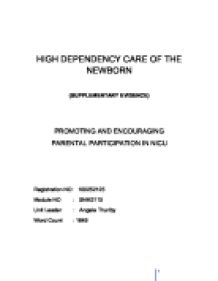 Encouraging parental participation in the NICU. According to Wigert et al (2006) the most difficult aspect of having a baby in NICU for mothers is being unable to take the important first steps to attachment: Haut et al (1994) states that family bonding

HIGH DEPENDENCY CARE OF THE NEWBORN (SUPPLEMENTARY EVIDENCE) PROMOTING AND ENCOURAGING PARENTAL PARTICIPATION IN NICU Registration NO: 100252125 Module NO : SNM3115 Unit Leader : Angela Thurlby Word Count : 1649 The focus of this discussion will be to encourage parental involvement in the NICU. My motivation for choosing this subject is an experience that occurred when I nursed a baby, who was a surviving twin from a premature delivery. The mother refused to handle her daughter saying that she was frightened of hurting her. Unfortunately the other twin had died shortly after delivery. The aim is to analyse the factors that can affect the initial parental attachment, the complex psychological needs of families during this stressful time, and also to make recommendations for interventions which can be used for future practice. According to Wigert et al (2006) the most difficult aspect of having a baby in NICU for mothers is being unable to take the important first steps to attachment: Haut et al (1994) states that family bonding within the neonatal environment is very difficult due to separation. Affonso et al (1992) supports this, suggesting that separating a mother from her baby when in need of intensive care prevents initial bonding. According to Boxwell (2010) the early delivery of a baby may make parents feel guilty and think that they have caused the unwanted situation for the infant. ...read more.

I took some photographs for them to keep because this was a special time in both their lives to remember. For many of the mothers this event is delayed because of the condition of their infant (Crawford &Hickson 2002). A study carried out by Bialoskurski (2000) looked at the relationship between maternal needs and priorities in the NICU environment. The authors cited other relevant studies in their initial literature search, with poor communication and conflicting advice from the nursing staff (Miles et al1992) being the common threads among the research. This study carried out a survey which aimed to investigate the nature and organisation of maternal needs and priorities in the neonatal unit using 209 mothers of premature infants. The search used a critical care inventory and a ranking scale and the data was analysed using multivariate analysis. It revealed clear priorities on maternal needs and the need for accurate infant related information, the priority of 93% of mothers. They also found that mothers appreciated the good communication practices with professionals. According to the authors the results show that infant related priorities may mask the mothers' own need for support and further suggests healthcare professionals and the baby's whole family should be involved in order to achieve successful mother-infant bonding. They found it was important to improve the communication skills between mothers and nurses, also expressing to mothers the necessity to look after themselves physically and mentally. ...read more.

improve the parental participation in the NICU, as well as improve parent-baby relationship, making sure that they are well equipped to cope after discharge. These are very practical tasks that can be followed through and implemented in practice. The central aspect to this would be adequately informing the staff on how important parental participation is. The results of this should be that parents have a stronger involvement within the NICU, without being nurse led all the time. Any misconceptions by the lack of advice for the parents should be dealt with, by improving the theoretical knowledge and current advances in the clinical area such as the parent craft classes, giving as much theoretical and practical support as possible will make it a living reality. The parent-nurse relationship can be reinforced by a higher level of communication between the two parties, by updating the parents with sufficient information on their level of understanding. Further follow up classes and information can be used to further help the parents cope after discharge. In conclusion, Neonatal nurses are in the prime position to support the parents in the unexpected situation, to help them to take the first steps in initial attachment and to make them confident for the care of their baby. I suggest there is a need to confront the complex matter of parental involvement so that neonatal nurses can offer effective timely support and guidance for parents. ...read more.