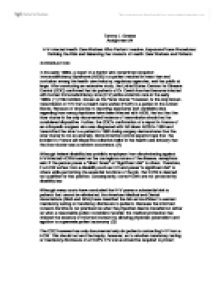 Tammy L. Greene Assignment #4 HIV-Infected Health Care Workers Who Perform Invasive, Exposure-Prone Procedures: Defining the Risk and Balancing the Interests of Health Care Workers and Patients INTRODUCTION In the early 1990s, a report of a dentist who transmitted Acquired Immunodeficiency Syndrome (AIDS) to a patient resulted in mass fear and confusion among the health care industry, regulatory agencies, and the public at large. After conducting an extensive study, the United States Centers for Disease Control (CDC) confirmed that six patients of Dr. David Acer had become infected with human immunodeficiency virus (HIV) while under his care in the early 1990s. (1) This incident, known as the "Acer cluster," however, is the only known transmission of HIV from a health care worker (HCW) to a patient in the United States. Because of obstacles to reporting exposures and unreliable data regarding how many physicians have been infected with AIDS, the fact that the Acer cluster is the only documented instance of transmission should not be considered dispositive. Further, the CDC's confirmation of a report in France of an orthopedic surgeon who was diagnosed with full blown AIDS in 1994 and transmitted the virus to a patient in 1992 during surgery demonstrates that the Acer cluster is not an anomaly. Some infection control experts hope that the incident in France will dispel the collective belief in the health care industry that the Acer cluster was a random occurrence. (2) Although federal disability law prohibits employers from discriminating against HIV-infected HCWs based on the contagious nature of the disease, exceptions exist if the person poses a "direct threat" or "significant risk" to others. Therefore, if a HCW suffers from a disability such as HIV and poses "a significant risk" to others while performing the essential functions of the job, that HCW is deemed not qualified for that position. Consequently, some HCWs are not protected by disability law. ...read more.

Although the Court explicitly discussed how contagious diseases give rise to discrimination, it declined to examine the question of whether someone who carries the HIV virus is physically impaired. Generally, however, courts have concluded that HIV constitutes a disability under section 504. In addition, in 1988, the United States Department of Justice declared that individuals who are HIV-infected are disabled under section 504 because the disease manifests itself in physical impairments that substantially limit major life activities such as breathing, talking, seeing, or walking. Based on those conclusions, various states have classified AIDS and HIV as protected disabilities in antidiscrimination statutes. The challenge is for the HIV-infected individual to rebut a defendant's defense that the plaintiff posed a "significant threat" to the health and safety of others. In 1987, Congress passed the Civil Rights Restoration Act, (11) which sought to codify the "significant risk" test articulated in Arline. Specifically, Congress "added a provision to section 504 of the Rehabilitation Act stating that persons with 'contagious diseases or infections' are not coveredunder section 504 if they pose a 'direct threat to the health or safety of other individuals.'" Thus, if an employer cannot eliminate the "significant risk" by reasonable accommodation, the employee will not be "otherwise qualified." Although codification of the Arline standard did not provide a definition of "direct threat," the ADA defines "direct threat" as one that poses a "significant risk to the health or safety of others that cannot be eliminated by reasonable accommodation." The United States Supreme Court granted certiorari to Abbott in November 1997. Therefore, the Court has the opportunity to address whether asymptomatic HIV constitutes a disability and whether a physician must treat an HIV patient. As to the second issue, the Court's disposition could have a profound effect on patients' rights in terms of the duty to treat and informed consent. On one hand, patients' rights could be restricted if the Court concludes that physicians do not have a duty to treat HIV-infected patients or that patients must disclose their HIV status. ...read more.

Nonetheless, a balance must be struck between an HIV-infected HCWs' right to be free from disability discrimination and patients' rights to be free from unnecessary risks. Unfortunately, physicians and other HCWs have failed to heed the CDC Recommendations that HCWs know their HIV status and abstain from invasive procedures. Thus, the burden should be placed on hospitals, managed care organizations, or other providers to know their employees' HIV statuses. Although the issue of HIV-infected HCWs remains sensitive, mandatory testing should be implemented as the most effective way to achieve an equilibrium between HCWs' and patients' interests. It seems absurd that emergency fire and police personnel, professional boxers, and foreign service personnel can be required to submit to mandatory HIV testing, but that HCWs, who owe a fiduciary duty to their patients, have continued to evade such a requirement. Although the probability of transmission is remote, HIV is lethal. Further, HCWs owe their patients unique responsibilities. These overriding considerations justify mandatory HIV testing. Work Sited: 1)The Rights of People Who Are HIV Positive, http://www.aclu.org/ 2) United States Centers for Disease Control (CDC) 3) American Medical and Dental Associations (AMA and ADA) 4) Abbott v. Bragdon: http://www.law.emory.edu/1circuit/mar97/96-1643.01a.html 5) Centers for Disease Control, Recommendations for Preventing Transmission of Human Immunodeficiency Virus and Hepatitis-B Virus to Patients During Exposure-Prone Invasive Procedures, MORBIDITY & MORTALITY WKLY. REP. 1 (1991) [hereinafter CDC Recommendations]. 6) American Dental Association, Dental Management of the HIV-Infected Patient Legal and Ethical Considerations, http://www.ada.org/prof/prac/issues/pubs/hiv/hiv.html 7) Public Health Service Act, http://www.fda.gov/opacom/laws/phsvcact/phsvcact.htm 8) Rehabilitation Act of 1973 , http://www.eeoc.gov/laws/rehab.html and Americans with Disabilities Act of 1990, http://www.eeoc.gov/laws/ada.html 9) Rehabilitation Act of 1973 , http://www.eeoc.gov/laws/rehab.html and Americans with Disabilities Act of 1990, http://www.eeoc.gov/laws/ada.html 10)School Board of Nassau County, Florida v. Arline, http://www.publichealthlaw.net/Reader/dl.php?doc_id=5480273 11) 1987 Civil Rights Restoration Act, http://www.usdoj.gov/crt/grants_statutes/legalman.htmls 12) Canterbury v. Spence., 464 F.2d 772 (D.C. Cir. 1972), http://plague.law.umkc.edu/cases/consent/canterbury_v_spence.htm 13) Mauro v. Borgess Medical Center, http://www.law.emory.edu/6circuit/feb98/98a0067p.06.html 14) Estate of Behringer v. Medical Center, http://students.washington.edu/aed/archivemidget/980303.htm 15) Scole v. Mercy Health Corp., 1994 W.L. 686623 (E.D. Pa. 1994) ...read more.