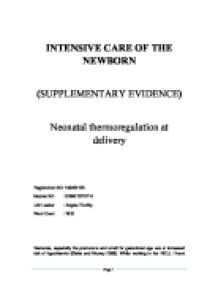 INTENSIVE CARE OF THE NEWBORN - Neonatal thermoregulation at delivery

INTENSIVE CARE OF THE NEWBORN (SUPPLEMENTARY EVIDENCE) Neonatal thermoregulation at delivery Registration NO: 100252125 Module NO : SNM2137/3114 Unit Leader : Angela Thurlby Word Count : 1632 Neonates, especially the premature and small for gestational age are at increased risk of hypothermia (Blake and Murray 2006). Whilst working in the NICU, I have recently cared for a very preterm baby born at 23+6 weeks gestation who was born by caesarean section. The baby was admitted to NICU because of her extreme prematurity and was transferred in a plastic bag on the resuscitaire. At the time of admission of the baby, the core temperature was 36.7 �C. Her skin looked very gelatinous and fragile and was beginning to peel because of the handling required for intubation and line insertions. She was placed in incubator with 80% humidity. The parents were very young and this was their first baby. When they saw her in the incubator for the first time with humidity they seemed very upset and frightened. I tried to explain to them that her baby's skin needed time to mature, and a doctor also explained about the skin and use of humidity. Following this they seemed to settle down. From this incident, I knew I wasn't up to date on the current techniques of thermoregulation, as I didn't know what the purpose of the bag was. ...read more.

In addition, the new born infant has a larger surface area compared to its mass; hence the very low birth weight infants have greater potential for heat loss (Elabassi et al. 2004), which occurs by conduction, convection, radiation and evaporation (Boxwell 2010). Vohra et al (2004) found that putting small premature babies into a plastic bag from the neck down immediately after delivery, without drying the infant, before placing on a radiant warmer and subsequently drying the head and proceeding to resuscitation prevented heat loss at the delivery of infants < 28 weeks gestation. Lenclen (2002), Bjorkland (2000) and Lyon (2004) also support this. Vohra studied 55 infants, randomised into a wrapped group and non wrapped group. Both groups were stabilized under radiant warmers. The infants in the wrapped group had a significantly higher temperature (36.5 �C) than infants the non wrapped group (35.6 �C). The bag remained in place until the baby was stabilised and admitted to the NICU. This method is cheap, effective and appears to be easily implemented and does not interfere with current practice of resuscitation. The occlusive wrap reduces the convective and evaporative heat loss more effectively than conventional drying and exposure (Vohra 2004). Hence I have learnt the importance of plastic bags, which is used in the NICU. Boxwell (2010) recommends the use of humidity to reduce skin water loss and improve the maintenance of body temperature. ...read more.

Finally, a study by Takayama et al. (2000) examined medical records for 203 healthy, full-term infants. He concluded that 17% of all temperatures between birth and 20 hours of life were in the hypothermic range. All these infants responded to simple interventions, such as bundling or increasing room temperature. Consequently, room temperature and maternal temperature should be assessed when managing hypothermic conditions. The room temperature should be at least 25 �C (WHO 2003). Thus, upon on study, there are a number of strategies that can be used to prevent hypothermia at birth. Due to very thin skin, large surface area relative to body mass, limited substrate for heat production, decreased subcutaneous tissue and an immature nervous system, premature infants are extremely susceptible to hypothermia. Water loss can also be result due to their immature skin. These traits are managed in different ways: putting small premature babies in to a plastic bag from the neck down immediately after delivery, and re-warming by placing under a radiant warmer can prevent heat loss at the delivery of infants <28 weeks gestation; the use of humidity to reduce skin water loss and improve the maintenance of body temperature and to minimise evaporative heat loss; the maintenance of room temperature. These techniques are based on scientific observation and ever increasing knowledge has resulted in improved methods of treatment. In my practice, I continue to discover the importance of putting theory into practice as a nurse in the NICU, and in keeping up to date with the current techniques. ...read more.