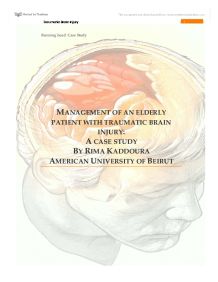 Management of an elderly patient with traumatic brain injury: A case study.

Running head: Case Study MANAGEMENT OF AN ELDERLY PATIENT WITH TRAUMATIC BRAIN INJURY: A CASE STUDY BY RIMA KADDOURA AMERICAN UNIVERSITY OF BEIRUT "No head injury is so serious that it should be despaired of nor so trivial that it can be ignored."(The Hippocratic aphorism). The ancient Greek physician, Hippocrates, first discussed cerebrovascular injuries 2400 years ago. He described them as the onset of sudden paralysis.800 years later; this sudden onset of paralysis was termed apoplexy. During this time, the Swiss pathologist Johann Jakob Wepfer discovered that apoplexy (i.e. cerebrovascular injury) was caused by a disturbance in the blood supply to the brain. Traumatic brain injury causes more than 80,000 emergency department visit in the elderly population (aged 65 years or older) each year (Gangavati et al., 2009). While motor vehicle accidents are the leading cause of traumatic brain injury (TBI) in the younger population (Susman et al., 2002), studies have concluded to other findings for the older population. More than 50% of TBI in the elderly are due to fall-related injuries, while this population constitutes 20% of all TBIs (Yap, & Chua, 2008). These numbers are especially important when considering the fact that the population aged 65 years or older is constantly growing (Susman et al., 2002). With this change in the population's demographics, the number of fall-related TBIs is expected to increase. In addition, this population has several risk factors that predispose them to TBI such as: muscle weakness, impaired balance (Yap, & Chua, 2008), anticoagulant use (Gangavati et al., 2009), comorbid conditions, and age related physiological changes. ...read more.

When dealing with a patient with TBI, it is important to remember that the consequences do not only include those of a primary injury but of a secondary insult as well. Primary brain injury Primary brain injury is the result of the direct impact. The blunt force that occurs (when someone falls down the stairs and hits his head for example) causes a disruption in the cerebral tissue and the brain's vascular supply. For a detailed explanation of this type of injury refer to figure 1. The movement of the brain inside the skull and the resulting injury is termed coup contrecoup. Coup refers to the area of the direct impact against the object, whether contrecoup refers to the area of the impact of the brain against the skull as a result of movement (Sise, 2001). This process leads to contusion which is accompanied with bruising and hemorrhage into the brain tissue (This was obvious on the first CT that was performed to the patient upon admission). Acute subdural hematoma When the surface vessels of the brain are torn as a result of an injury that involves contusion and laceration, subdural hematoma develops. Acute subdural hematoma is defined as the accumulation of blood between the dura and the brain within 48 hours of an injury (Reddy, 2006). An immediate CT scan and blood studies are ordered for diagnosing subdural hematoma. ...read more.

In addition, it has been proven that when decreasing ICP, better management would result if it is coupled with ICP monitoring (knowing that the upper threshold of ICP is 20-25 mm Hg). > Feeding should be initiated by a maximum of 1 week following injury (Early nutritional support has been found to improve outcome). > Seizure prophylaxis is not beneficial if it is started more than 1 week after the injury. > Steroids are not recommended in the management of TBI Special considerations and conclusion After comparing these findings with the care that the patient received, it may be noted that his care followed nursing and medical research (although not to a full extent). He underwent a craniectomy with evacuation of subdural hematoma; anticonvulsants (Epanutin) were introduced since his first day of admission to prevent seizures, and feeding was initiated five days after admission. In addition, the patient was receiving Mannitol, and not hypertonic saline, with his osmolality observed. He also received gastric ulcer prophylaxis, DVT prophylaxis, and his head of bed was elevated above 30�. The patient's management however did not follow recommendations in terms of ICP monitoring. His ICP in fact was not monitored. In conclusion, with the management of TBI being multifaceted and requiring the input of all the members of the healthcare team, standardized clinical pathways and unified guidelines may be recommended. By coordinating patient care and management, they would therefore improve care and eventually lead to a better outcome. Appendix A Figure 1. The pathophysiological process of primary brain injury A.B. Figure 2. Illustration of intracranial hemorrhage. A.Intracerebral hemorrhage. B. ...read more.