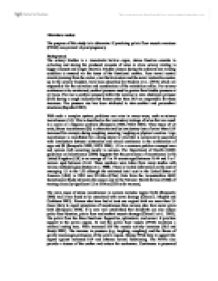 Literature review The purpose of this study is to determine if practicing pelvic floor muscle exercises (PFME) can prevent UI post pregnancy. Background The urinary bladder is a viscoelastic hollow organ, whose function consists in collecting and storing the produced amounts of urine to allow urinary voiding in bigger amounts and longer intervals. Bladder closure during the ordinary non-voiding condition is ensured via the tonus of the functional urethra. Four nerval control circuits (coming from the cortex, over the brain stem and the sacral micturition center, up to the urinary bladder), have been described by Bradley et al. (1976) which are responsible for the activation and coordination of the micturition reflex. For urinary continence to be maintained, urethral pressure must be greater than bladder pressure at all times. The rise in urethral pressure before the increase in intra abdominal pressure (IAP) during a cough indicates that factors other than IAP are responsible for those increases. The pressure rise has been attributed to intra-urethral and periurethral structures (Sapsford 2001). With such a complex system, problems can arise in many ways, such as urinary incontinence (UI). This is described as the involuntary leakage of urine that can result in a social or a hygienic problem (Sampselle 2000; NICE 2006). Three types of UI exist; Stress incontinence (SI) is characterized by involuntary loss of urine when IAP increased for example during coughing, sneezing, laughing or physical exertion. Urge incontinence is manifested by a strong desire to void that is occasionally associated with involuntary detrusor contraction and mixed continence is the combination of urge and SI (Sampselle 2000; NICE 2006). UI is a common problem amongst men and women (ref) occurring mostly in women. The Department of Health (DOH) guidelines on incontinence (2000) suggests that the prevalence of incontinence in the United Kingdom (UK) is an average of 1 in 14 women aged between 15-44 and 1 in 7 women aged between 45-64. These numbers were taken from many studies with various methodologies (Button et al. 1998). ...read more.

It has also been shown that calling someone's home is intrusive and the participants may find this uncomfortable. As the study was a longitudinal one, the data involved correlation among the outcomes at 6 weeks, 3 months, 6 months and 12 months post-partum. This study identified that logistic regression could not be used to examine any associations between UI and predictor variables due to this correlation. Instead they generalised estimating equations to account for the correlation. There were 523 women at the beginning of the study to 493 participants at 6 weeks to 385 participants at 12 months. Examination of the drop out rate suggests that the rise in the rate of incontinence at the 12 month interview was the result of selective attrition. This study had several identifiable flaws including the lack of randomisation and blinding and using a convenience sample. Therefore, it was not possible to determine the direction of this effect. A random sample is one where the researcher insures that each member of that population has an equal probability of being selected. The effect of pelvic muscle exercises on transient incontinence during pregnancy and after birth was researched by Sampselle et al. (1998). The results showed that when controlling for baseline UI score, the analysis of covariance showed less UI in the training group at 35 weeks pregnant, 6 weeks postpartum and 6 months postpartum. At the end of the 12 month period, the difference had disappeared. The number of women with UI before and after the intervention was not reported and a high drop out rate meant that the results may not have been a true reflection. This study supports the findings of Kathryn et al. (2003) which showed there was no significant difference between the groups in PFM strength. A similar study by Morkved et al. (2003) looked at PFM training during pregnancy to prevent UI in late pregnancy and after delivery. ...read more.

There was also a lack of consistency between the samples with regards to the varying degrees of incontinence as well as patients who had undergone surgery with a lack of standardization of the sample. Will put a few more studies on compliance here Conclusion There is limited published RCT's available relating to identified problems of stress incontinence in women. There is a growing body of evidence to suggest this is an area that deserves attention, considering that there is now little doubt childbirth is the most important single factor underlying stress incontinence. It is extremely important that when we consider the emphasis today's society places on exercise, to prevent problems later in life, awareness about the importance of protecting the pelvic floor through pelvic floor exercises alongside general exercise and sporting activities should be raised. Currently, the first time that the majority of women hear of pelvic floor exercises is at antenatal classes. Given the evidence of the benefits of PFME's, it is not unreasonable to systematically offer these conservative interventions to women who are identified as being at risk and taught in a way in which they have a significant benefit. The successful promotion of continence could result in a better quality of life for women most at risk, a reduction in surgery and less cost on the NHS. Upon analysis of the literature PFME's seems to be the most effective and favorable treatment to reduce the symptoms of UI during pregnancy. There seems to be little consistency to when PFME's should be started in pregnancy with very few studies reporting this. There seems to be contradictory evidence with regards to the effects of PFME's during pregnancy and post pregnancy to prevent UI. However, there is strong evidence to suggest that practicing PFME during pregnancy can reduce the symptoms of UI post pregnancy. More research needs to be done with better methodologies to show the prevention of UI with PFME's post pregnancy. Proposal Title: Pelvic floor muscle exercises in early pregnancy to prevent stress urinary incontinence post pregnancy. ...read more.