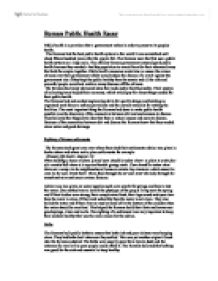 If they look unhealthy then the water is not clean. They also boiled the water and if there was no mud or sand left in the bottom of the cauldron then the water should be excellent. This helped the Romans build their forts and towns near good springs, rivers and wells. The sighting of a settlement was very important to keep their soldiers healthy that was the main reason for the advice. Baths The Romans built public baths to ensure that both rich and poor citizens were keeping clean. They had baths built wherever they settled. This was yet another original Greek idea the Romans adopted. The baths were usually open from 1pm to dusk and the entrance fee was low so poor people could afford it. The Romans believed that bathing was good for the sick and essential to keep healthy. Toilets The Romans built Latrines like baths for the whole public, which was a first. ...read more.

Water flowed down one side and was forced across and up the other side due to atmospheric pressure the opening on the later side had to be lower than the first side were water flowed down. Military hospitals Concern for soldiers yet again lead to a health provision. These were mainly built on the frontiers of the empire. The hospitals were not one of Rome's Great achievements except for their drainage and sanitation system, which made them a model for the future. Hygiene was essential if they wanted the soldiers to get back to battle quickly. The not so great things about the hospitals were the lack of professional doctors only the army commander had his personal surgeon. The doctors were just normal soldiers experienced in basic treatment. Conclusion Many of the features of the Roman Public health system have inspired today's public health facilities. It was like many Roman ideas very advanced and set the standard for public health today. We are lucky that the Romans had conquered a vast empire or we may have been behind on health and hygiene today. ...read more.