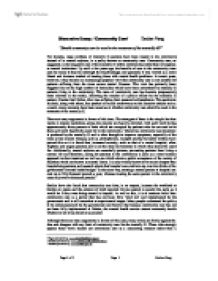 &quot;Should community care be used in the treatment of the mentally ill?&quot; For decades, large numbers of mentally ill patients have been treated in the community instead of in mental asylums, in a policy known

same patient in the community costs only twelve thousand pounds.3 Studies have also found that community care does, in no respect, increase the workload or burden on carers and the amount of work required for one patient is usually the same as it would be if they were being treated in hospital. As well as this, it is of common belief that community care is a policy that has not been fully 'tried out' and implemented by the government and is still somewhat at experimental stages. Many people understand the policy to be under-resourced by the government and believe that because community care has not yet been fully implemented in Britain, the mental health service cannot accurately decide whether or not it has failed or succeeded. Although there are many arguments in favour of this issue, many critics are firmly against the idea and disagree with any form of community care for the mentally ill. Those who strongly oppose these views instead see community care as a cost-cutting measure rather than a genuine alternative. ...read more.

My view on this topic is that patients with the more severe mental illnesses should not be integrated into the community as it poses a serious risk to public safety. It appears that the medical profession is prepared to take chances with the lives of citizens by releasing people into the community, knowing that there is a significant risk that they could harm others. I believe that this is wrong and generally, I am concerned about community care expanding further into more areas. Mental health workers seem incapable of reliably monitoring the progress of community care patients to ensure that they are taking appropriate medication. Glaister Butler was, for instance, found with eighteen months worth of medication at his residence and this is unacceptable. If community care is going to continue to be used in the treatment of the mentally ill, serious changes in the government's mental health policy will have to occur. One significant topic, and one which is vital for the welfare of the mentally ill, is that they need widespread public acceptance and community care is the first step towards this. ...read more.