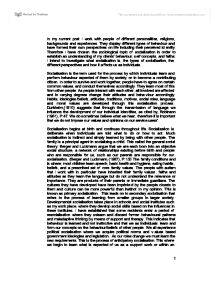 In my current post I work with people of different personalities, religions, backgrounds and experiences. They display different types of behaviour and have formed their own perspectives on life including their perceived identity. Therefore I have chosen the sociological topic of socialisation in order to establish an understanding of my clients’ behaviour, self concepts, and faiths. I intend to investigate what socialisation is, the types of socialisation, the different perspectives and how it affects us as individuals.

Socialisation is the term used for the process by which individuals learn and perform behaviour expected of them by society or to become a contributing citizen. In order to survive and work together, people have to agree on certain common values, and conduct themselves accordingly. They learn most of this from other people. As people interact with each other, all involved are affected and in varying degrees change their attitudes and behaviour accordingly. Habits, ideologies/beliefs, attitudes, traditions, motives, social roles, language and moral values are developed through this socialisation process. Durkheim,(1910) suggests that through the transmission of language we influence the development of our individual identities, as cited by, Robinson (1981), P:47. We do sometimes believe what we hear, therefore it is important that we do not impose our values and opinions on our service users’.

Socialisation begins at birth and continues throughout life. Socialisation is deliberate when individuals are told what to do or how to act. Much socialisation is indirect and simply learned by being with other people. The family is a principal agent in socialising a child. This called the general social theory. Berger and Luckmann argue that we are each born into an objective social structure, a network of relationships existing before birth and people who are responsible for us, such as our parents are responsible for our socialisation, (Berger and Luckmann,(1967), P:155 The family conditions and is where; most children learn speech, basic health and hygiene, eating habits, beliefs, and a prescribed set of core family values. The people with autism that I work with in particular have inherited their family values, faiths and attitudes as they learn the language but do not understand the relevance or importance. They are products of their parents or immediate guardians. The cultures they have developed have been imprinted by the people closets to them and culture can be more powerful than instinct in my opinion. This is known as primary socialisation.  This leads on to secondary socialisation that refers to the process of learning from smaller groups in larger society. Developmental socialisation takes place in schools and social institutes such as my work place, where they develop social skills based on the influences in these institutes. I have established that some residents enter a period of resocialisation where they unlearn and discard former behavioural patterns and maladaptive thinking by means of support and therapy. This indicates that behaviour is learned and not instinctive and that we as individuals learn and form our concepts on the behaviour/beliefs of other people. We all experience political socialisation where we acquire political norms and values based government ideologies and legislation. As our roles change we must learn the new requirements. This is the process of anticipatory socialisation. This where we begin to learn what is expected of us as a support work or within an occupation.  Tertiary socialisation occurs mainly in adults, and is ongoing, because individuals consistently encounter new social situations. People who are not socialised lack most of the attributes we normally associate with a human being. This can be identified in the cases of feral children. Socialisation can be negative and have undesired affects on people such as some criminals and some of my clients that have been institutionalised for most of their lives. Their learned behaviour is not typical to their condition or diagnoses. Erving Goffamn,(1956), suggests that patients in mental health hospitals build new lives centered on the institution and that institutions are geared to standardise behaviour as cited in O, Donnell,(1997) P:291. This theory was based on his total institutions where he discovered the effects institutions can have on a person’s identity. Most of us have private lives where we can escape from the bureaucratic world, however people in mental health hospitals on a medium to long-term placements can not and adjust to the bureaucratic structure in institutions.

There are a number of sociological perspectives that explain how society is formed and where we exist in society. Each perspective in socialisation presents severe methodological problems. It is difficult to suggest that one is wrong and another is right; based the fact that our circumstances, imprinted and individual vales are different.. This is an important fact to consider when working with varied groups, suggesting that you should extend a positive regard for individual opinions and values. The dominant perspective that socialisation has been viewed is that of the functionalism, particularly the work of Talcott Parsons.  Parsons,(1951) comments that” socialisation, like learning continues throughout life” (as sited by Robinson, P34). Parson suggests that socialisation is the role of passive acceptance and one of active engagement with the world. Engagement that changes the world also changes the individual. This helps us to understand the need for service users’ to be self governing and participate in society in order to experience and grow. Kluckhohn,(1958) suggest that humans are ‘good, but ‘corruptible”. He also identifies that strong family ties can influence ones actions’ ,Robinson,(1981.) P:35.  Service users sometimes develop behaviour displayed in institutions by other patients and behaviour can be challenging or considered deviant.

Sociologists’ within the functionalism approach sees society like being a living person, just like the parts of the human body working in harmony. This is known as the organic analogy. They believe that everyone plays a part or function in society with social consensus based around shared values; or a vital process by which a value-consensus is produced in society.

Socialisation can also be compared to social psychology theories by McClelland,(1963) that socialisation is an important ingredient /process in order to ascertain the feeling of accomplishment and the desire to do well. Therefore it is an important factor in the development of people and how they function. This indicates that we should always extend a positive regard to services users’ as their motivation and their intrinsic need to grow may be conditioned by others in society, Mitchell,(1981), P:206.

Conflict/Marxist sociologists see society as being made up of very large social groups called social classes where each individual has different experiences and interests. They suggest every society contains class, ethnic, gender and other differences, from which arise various kinds of conflict.They suggest that power is inherited by conflict between individuals and groups. The agents of social control and integration may be: the state, the family or institutions of civil society. A person's up bring can have an influence on their self concept and how they view both society and life. We often see a difference within the values of service users’ that have come from privileged backgrounds to those who have experienced social disadvantages e.g., their perception of prospects and status. Marxist/conflict theorist suggests that the following methods of social control:  Regulation, commodification, ideology and democratisation.

Sociologists within the interactionism perspective tend to focus on the individual rather them society, looking at the way we create the social word through behaviour as opposed to society creating individuals. I can see the importance of this approach as people often use behaviour to influence the world and other around us. This is even more prominent with autistic clients as they use behaviour to influence circumstances and the environment due to the lack of social skills.

From the various perspectives I can see how individuals society, our significant figures and leadership figures in society can influence our behaviour, beliefs and values, but also how our behaviour, opinions and attitudes can influence others. It demonstrates the need for a positive care value base ensuring respect, integrity, empowerment and equality of others. It helps us to recognise that service users should have equal rights regardless of their culture, background and ethnicity.  There are similarities within the perspectives for example the Marxist and functionalist views on substructure: external influence e.g., the family, media, religion, culture, norms, social structures, education and the state; how we conform to social structures and how we are socialised into what is rights and wrong. Functionalists see socialisation as a positive process where as Marxist see socialisation as a way of producing conformity, but disagree that this benefits society as a whole, Haralambos and Holborn,(2004) P:687. Marxist theory tends to assume that socialisation that social classes is the basis of  socialisation and that other sources of inequality and difference are not important; where as it seems much more complex and diverse than just class distinction.  The functionalist approach underestimates the amount of conflict that can take place during socialisation.

In conclusion there are many different phases of socialisation and there many agents that influence the process of socialisation such as peer groups, the media, religion and the work place. Socialisation is not deterministic as we do control our own lives. We should ensure as far as possible that experiences we present/demonstrate to our clients are positive and do not conflict with their values. Our input should only be in their best interest and empathy/acceptance should be demonstrated when they express their opinions. It is sometime hard to extend a positive regard to someone if you do not understand the underpinning influences imposed on them from birth by society and groups in society; however we need to understand where the behaviour has come from in order to modify it or understand why they behave the way they do.  It is apparent from my study that socialisation is a process where individuals become self aware and learn about the cultures in society and how that can impact on who we are.

Mitchell. G, (1981), A new Dictionary of Sociology, Routledge and Kegan

Robinson, P, (1981), Perspectives on the Sociology of Education, Routledge and Kegan Paul, London.