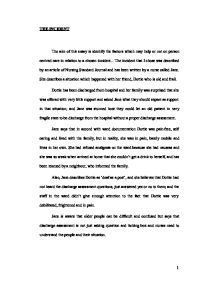 The aim of this essay is identify the factors which may help or not on person centred care in relation to a chosen incident. .

THE INCIDENT The aim of this essay is identify the factors which may help or not on person centred care in relation to a chosen incident. . The incident that I chose was described by an article of Nursing Standard Journal and has been written by a nurse called Jane. She describes a situation which happened with her friend, Dottie who is old and frail. Dottie has been discharged from hospital and her family was surprised that she was offered with very little support and asked Jane what they should expect as support in that situation; and Jane was stunned how they could let an old patient in very fragile state to be discharge from the hospital without a proper discharge assessment. Jane says that in accord with ward documentation Dottie was pain-free, self caring and lived with the family, but in reality, she was in pain, barely mobile and lives in her own. She had refused analgesia on the ward because she had nauseas and she was so weak when arrived at home that she couldn't get a drink to herself, and has been rescued by a neighbour, who informed the family. Also, Jane describes Dottie as 'deaf as a post', and she believes that Dottie had not heard the discharge assessment questions, just answered yes or no to them; and the staff in the ward didn't give enough attention to the fact that Dottie was very debilitated, frightened and in pain. ...read more.

This is what happened with Dottie: the nurse who did her discharge assessment was focused on the task rather to the patient, even if she didn't intend to do it. The nurse was focused on making the system work and not on the patient needs as the assessment process needs to be placed in the context of government policy and organizational priorities, like the need of empty beds. Elderly people are the largest category of patients in the NHS and have become an important priority group. Old age brings many symptoms, such deafness, arthritis, and confusion, and mental confusion can be increased by the intervention of health professional staff (Levitt, Wall and Appleby, 1999) while they are in hospital and problems often arise after discharge because he professionals involved in their care don't take account of their home situation. The NHS Plan (DH, 2000) aims to shape its services around the needs and preferences of individual patients, their families and their carers, offering a fast and convenient care delivered to a standard, with services available when people require them and tailored to their individual needs as patients are the most important people in the health service. It aims to shape the care around the convenience and concerns of patients, giving patients new rights and new roles within the health service. The Standard 2 of National Framework for Older People - NSF (DH, 2001) ensure that older people are treated as individuals and they receive appropriate and timely packages of care which meet their needs as individuals, with NHS and social care services treating older people as individuals and enable them to make choices about their own care. ...read more.

points that could mislead her care, as they have past important points in her care such as not realize how debilitated she was. CONCLUSION Dottie was past care in many ways. The health care professionals, whose look after her, have been person centred care. She hasn't had the right of choices of her care, and she hasn't had a suitable assessment done. Her needs haven't been correctly identified, and nurses weren't aware of her emotional and psychological states. The nurses were tasked orientated, missing points about Dottie such as the fact that she is deaf, and it not clear if Dottie didn't heard the questions of the discharge assessment or if she answered whatever she want because she wanted to go home as she was frightened to be in hospital. The Dottie's assessment wasn't contextualised along with her needs, wants and aspirations as she couldn't exercise her freedom of choice, express her opinions, engage in decision-making, communicate, and be heard. The care delivered to Dottie wasn't tailored around her needs and they weren't the base for decision making. The other health professionals involved in her care also haven't been centred care. Lack of communication between them was present in the interprofessional relationship, however the article doesn't make any comment about other professionals involved in Dottie's care, but it can be presumed by the fact that she was discharged from hospital in a very debilitated state, and discharge process involves other professional other than nurses. Nurses and all other health professionals need to be more focused on their patients rather than fill paper only. ...read more.