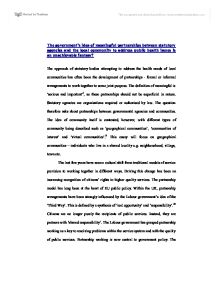 The government's idea of meaningful partnerships between statutory agencies and the local community to address public health issues is an unachievable fantasy?

The government's idea of meaningful partnerships between statutory agencies and the local community to address public health issues is an unachievable fantasy? The approach of statutory bodies attempting to address the health needs of local communities has often been the development of partnerships - formal or informal arrangements to work together to some joint purpose. The definition of meaningful is 'serious and important'i, so these partnerships should not be superficial in nature. Statutory agencies are organisations required or authorised by law. The question therefore asks about partnerships between governmental agencies and communities. The idea of community itself is contested, however, with different types of community being described such as 'geographical communities', 'communities of interest' and 'virtual communities'.ii This essay will focus on geographical communities - individuals who live in a shared locality e.g. neighbourhood, village, town etc. The last few years have seen a cultural shift from traditional models of service provision to working together in different ways. Driving this change has been an increasing recognition of citizens' rights to higher quality services. The partnership model has long been at the heart of EU public policy. Within the UK, partnership arrangements have been strongly influenced by the Labour government's idea of the 'Third Way'. This is defined by a synthesis of 'real opportunity' and 'responsibility'.iii Citizens are no longer purely the recipients of public services. Instead, they are partners with 'shared responsibility'. The Labour government has grasped partnership working as a key to resolving problems within the service system and with the quality of public services. ...read more.

Partnership requires equality amongst all actors as common stakeholders, with wide and balanced representation. But the rhetoric of partnership frequently masks unequal relationships among partners - an imbalance of power between the collaborating bodies. The statutory agencies hold most of the power and resources. In contrast, community groups lack resources and expertise, with less experience of decision-making. The community sector has to satisfy the State, develop and deliver a range of services that the State wants, report on and monitor them and ensure that they meet high quality standards. A community representative has commented on this imbalance: Are we in the business of driving social change or are we the agents of social control? Do we act as the litmus test for the government policy highlighting its failures and campaigning for change or do we act as a buffer for the government, struggling to carry out policy and alleviating its worst excesses, thereby limiting opposition at community level. xxiii As well as theoretical problems with partnerships, there are some practical difficulties. Partnerships are based on two fundamental assumptions. Firstly, that sufficient harmony exists between groups to allow collaboration to occur. Secondly, that the decision-making process can be readily controlled. Unfortunately, these do no always hold true. Douglas (1998) states that the reporting of the experiences of partnership working has tended to be restricted largely to positive, 'anecdotal' stories.xxiv They do not discuss the problems that were faced by those involved in the partnership work. For example, in a review of progress within the first year of the Labour government, Klein (1998) ...read more.

The debate should also have included a section where the audience voted for one group or the other. The group was faced by some practical problems. Some group members were absent through leave and bereavement. In addition, we all felt constrained by the relatively short time scale. Coming from geographically remote areas, meeting outside timetabled sessions was not possible. If there had been more time, we might have been more systematic in picking up emerging key themes. Initially, we had little sense of how much information we needed to input into the debate. I believe that much of the information that we collected was not needed in the final debate. The most challenging part of the debate was the presentation where I had to play a character who does not believe in partnership working. In conclusion, I feel that this experience has been very positive and it has been an effective learning process. The project taught me to be tolerant of other peoples' ideas and views. I tried to keep an open mind and not let my own preconceptions get in the way. I have learnt about the benefits of working together. The debate was also important in drawing together the different parts of the MPH course. Although we did not purposefully input bits from the other MPH modules, these fell naturally into place. The project definitely gave me a chance to apply the skills that I had picked up from other parts of the MPH. In addition, we were encouraged to be creative in this module and I believe that this was reflected in our final performance. Finally, doing the module gave me a sense of versatility, well-roundedness and confidence in my abilities. ...read more.