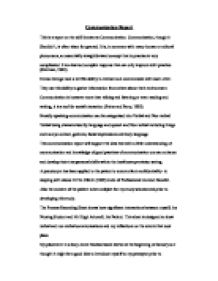 Communication Report This is a report on the skill known as Communication. Communication, though it Shouldn't, is often taken for granted. It is, in common with many human or cultural phenomena, an essentially straightforward concept that in practice is very complicated. It is a learned complex response that can only improve with practice (Sherman, 1994). Human beings have a terrific ability to interact and communicate with each other. They use this ability to gather information from others about their environment. Communication is however more than talking and listening or even reading and writing, it is a tool for social interaction (Potter and Perry, 1995). Broadly speaking communication can be categorised into Verbal and Non-verbal. Verbal being characterised by language and speech and Non-verbal including things such as eye contact, gestures, facial expressions and body language. This communication report will support the idea that with a little understanding of communication and knowledge of good practises of communication one can enhance and develop their interpersonal skills within the healthcare provision setting. A pseudonym has been applied to the patient to ensure client confidentiality- in keeping with clause 10 the UKCC (1992) Code of Professional Conduct Booklet. Also the consent of the patient to be a subject for my study was secured prior to developing this study. The Process Recording Sheet shows how significant interactions between myself, the Nursing Student and Mr Hugh Ashcroft, the Patient. ...read more.

Silence. This is not a communication report about religion. These too gentlemen had got on so well and now they had silenced each other. The man who I knew went to church had not been particularly offended. Hugh however, had realised what he had said and looked as if he now regretted offending the other patient in such a manner. He became quite agitated. The focus of his agitation was himself. I, on the other hand, felt a bit responsible for the whole situation as I had first broached the subject. The other patient was quite calm and remained quiet as Hugh tried to communicate his apology. Hugh's condition did not improve as he made himself more upset in trying to apologise. Again, as I felt a bit to blame I tried to mediate. Remembering a recent lecture on the importance of body language in communication I recalled a technique proposed by Gerard Egan that I had come across in doing some lateral reading around this subject. I quickly rehearsed the mantra- S.O.L.E.R. S- Sit or stand squarely, O- Open posture, L- Lean in the general direction of the patient, E- eye contact to be maintain in a good unthreatening manner and R- relax. Egan (1986). I had that in the back of my mind as I approached Hugh in a hopefully unthreatening manner with a smile on my face. ...read more.

1998, pg 143). It has been an old truism that it is not what you say but how you say it. "If we take seriously the idea that caring is the future of all healthcare...it is not that we care which is moral, but how we care" -Marks-Maran (1997, pg 87) I feel that is why communication is so important to nurses. Of course nurses need to be academics at times and have excellent fine motor skills but all this would be lost if they communicate and express themselves inadequately to patients- and to each other. References BENNER, P., et al. (1989). The Primacy of Caring- Stress and Coping in Health and Illness. Addison-Wesley Publishing. Wokingham, England. CLARKE, D.J. (1998). Process Recording of what value is examining nursing interaction through assignment work. Nurse Education Today, 1998 Feb: 18 (2). EGAN, (1986) The Skilled Helper. 3rd edition. Brooks/Cole Publishing. Pacific Grove, California. KAGAN, C., EVANS, J. (1995) Professional Interpersonal Skills for Nurses. Chapman and Hall. London MARKS-MARAN, D., Et al. (1997) Reconstructing Nursing; Beyond Art and Science. Bailliere Tindall. London. POTTER & PERRY. (1995) Foundations in Nursing Theory and Practice. 3rd Edition. Mosby. St.Louis, Missouri. ROGERS, C., (1967) On Becoming a person: A Therapist's view of psychotherapy. Constable. London SHERMAN, K., (1994) Communication and Image in Nursing. Delmar Inc. Albany, N.Y. UKCC., (1992) Code of Professional Conduct. 3rd Edition. London. CONTENTS PAGE 1-7 Communication Report. 8 Appendix One - Process Recording Sheet. ...read more.