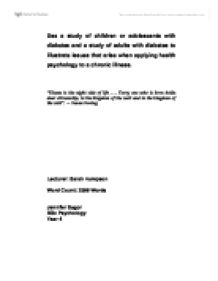 Use a study of children or adolescents with diabetes and a study of adults with diabetes to illustrate issues that arise when applying health psychology to a chronic illness. "Illness is the night side of life . . . Every one who is born holds dual citizenship, in the kingdom of the well and in the kingdom of the sick". - Susan Sontag Lecturer: Sarah Hampson Word Count: 2586 Words Jennifer Sagor BSc Psychology Year 4 Since the mid 1900's we have seen advancements in medicine that at one point could only be dreamed about. There has been an accumulation of discoveries that demonstrate how diseases some of them renowned for their terrifying afflictions, could be eliminated forever. The 'development of extremely high-tech machines greatly advanced the diagnosis and surgery, and a massive drug industry has developed drugs to combat almost every illness'1. Since then medicine has become dominated by the pursuit of 'cures' or fast acting treatments mainly to the benefit of acute conditions but has also greatly increased the life expectancy of those with chronic conditions. The benefits of this success have surmounted even the wildest of expectations, but research suggests that this strong focus on acute care models has been at the expense of improving the care of those who cannot be cured meaning those with chronic illness2. Chronic conditions are 'any disease or condition which involves some disability that lasts for a long period of time or is marked by a frequent reoccurrence' and requires training or motivation on the part of the patient to care for themselves3. ...read more.

Overall, the risk for death among people with diabetes is about 2 times that of people without diabetes12. Effective diabetes management requires adherence to a complex and time consuming regimen including strict dietary control, exercise, blood glucose monitoring, regular daily (1 to 3) insulin injections prescribed mostly in Type I diabetes, and weight loss, pills and (rarely insulin) mainly prescribed to Type II diabetes. In spite of all of this, diabetes is treatable, research has shown that following a set of these behaviours will keep blood glucose under control and reduce incidence of complications15, however the most common reason for diabetic complication is non-adherence to medical regimen. Non adherence is also the most common reason for psychological referral although in a statistical sense it is the norm and not the exception16 17. And thus not surprisingly a large portion of psychological research has focused on diabetic compliance and non-compliance behaviour and amount of glycemic control. A study that illustrates the implementation of theory and the different issues that arise in Adults with type II diabetes in compliance vs. non compliance was carried out by Savoca, Miller and Quandt (2003) in which they studied diabetes self-management practices and philosophies of individuals with poor (HbA1c > 8.0%) or excellent (HbA1c < 6.5%) glycemic control18. They interviewed 44 individuals who were 40 -65 years of age and who had been diagnosed with diabetes for over 1 year. These participants included African Americans, women and persons with low income, all of which have been identified to be at a higher risk for diabetes and diabetes complication12 19 20. ...read more.

Several children reported fear of hypoglycaemic attack especially if it was on a day the nurse wasn't there children wanted teachers and nurses to understand and not call undue attention to them. Children also reported wanting reminders however there was a fine line between too many and too little. The Generaliseability of this research is limited to that population able to attend camps and those who would be more likely to volunteer for participation. Over half of the participants were able to keep good control of their diabetes so these findings may prove more applicable to children already doing fairly well. Nabors et al 2003 postulated that future studies may yield more information if researchers ask children what type of education would be most helpful to improve support of staff. Overall the findings of this research lend a great deal into the perceptions children have of their life at school and the support they get in order to practice good diabetic care the issues mentioned are also consistent with the previous findings mentioned earlier29 30 31 32. These studies illustrate the implementation of theory by psychologists in order to measure behaviour for the final goal of every health psychologist which is to achieve change and create appropriate intervention for the treatment of diabetes and other acute or chronic diseases. Diabetes is not just a medical issue requiring only biomedical treatment it effects the family of the diabetic and requires psychological intervention that is based on an understanding of the developmental stages, knowledge of the course of the treatment and sensitivity to the emotional and life issues the may sabotage the treatment 33. ...read more.