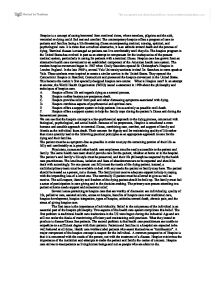 What is Hospice care?

Hospice is a concept of caring borrowed from medieval times, where travelers, pilgrims and the sick, wounded or dying could find rest and comfort. The contemporary hospice offers a program of care to patients and families facing a life threatening illness encompassing medical, nursing, spiritual, and psychological care. It is more than a medical alternative, it is an attitude toward death and the process of dying. Terminal disease is managed so patients can live comfortably until they die. The hospice program in the United States has evolved in part as an attempt to compensate for the inadequacies of the present medical system, particularly in caring for patients with a terminal illness. Hospice care has grown from an alternative health care movement to an established component of the American health care system. The modern hospice movement began in 1967 when Cicely Saunders opened St. Christopher's Hospice in London England. In the late 1960's, several Yale University students invited Dr. Saunders to come speak at Yale. These students were inspired to create a similar service in the United States. They opened the Connecticut Hospice in Branford, Connecticut and pioneered the hospice movement in the United States. This became the nation's first specially designed hospice care center. What is Hospice care? In an attempt to answer, the World Health Organization (WHO) issued a statement in 1990 about the philosophy and techniques of hospice care. A. Hospice affirms life and regards dying as a normal process. B. Hospice neither hastens nor postpones death. C. Hospice provides relief from pain and other distressing symptoms associated with dying. D. Hospice combines aspects of psychosocial and spiritual care. E Hospice offers a support system to help patients live as actively as possible until death. F. Hospice offers a support system to help the family cope during the patient's illness and during the bereavement process. We can see that the hospice concept is a bio-psychosocial approach to the dying process, concerned with biological, psychological, and social health. ...read more.

reported that hospice care has been found to have better control of pain symptoms, greater satisfaction with care, less anxiety among family caregivers and less cost compared with conventional care. Despite these findings, relatively few dying patients receive hospice services. According to Hanrahan and Luchins, "a recent British study reported that only 7% of dying patients received hospice care." The results of the research by Hanrahan and Luchins confirm that very few patients who are dying from dementia receive hospice services. The majority of hospice programs do, however, enroll patients with a secondary diagnosis of dementia. This suggests that hospice care for patients whose primary diagnosis is dementia is "feasible from a clinical and fiscal perspective" (Hanrahan & Luchins). One obstacle to providing hospice care for dementia patients is in determining survival time, an essential component prior to admission in most hospice programs. A sixth issue concerns the benefits of hospice care over traditional care. An article by Dawson (1989) compared the needs satisfaction of hospice and traditional programs of care. Dawson noted that hospice recipients frequently express a greater level of satisfaction with their program of care. This article explored the relationships of needs satisfaction, perceptions of the nurse and overall satisfaction with the program of care. Results showed that home care provided by a Medicare certified, community-based hospice program had "the highest levels of needs satisfaction, satisfaction with the psychosocial support of the nurse and overall program satisfaction" (Dawson). Traditional hospital care had "the lowest levels on each of these dimensions" (Dawson). The results of this study show that families experiencing the death of a loved one are most likely to have their needs met in a hospice situation rather than a traditional hospital. A seventh issue is the development of hospice programs. Research on the development of existing hospice programs is important for future hospice growth. Simson and Wilson (1986) indicated that there are several areas within society that affect hospices. ...read more.

More research is needed to determine the benefits of hospice care over traditional methods of care. As more people become aware of this alternative approach to care for the dying, more potential participants will be available for research. One suggestion for future research is to provide surveys for families of patients enrolled in hospice programs and all other programs involving care for the dying. Surveys could be given at various times during the patient's life and after so as to assess the families' attitudes at different times of the grief process. This survey would be designed in an attempt to determine what factors led people to choose hospice programs, and what factors led people to choose other programs. The survey should ask for what people's needs are for the patient and family during the dying process. This information would give hospice programs suggestions for how to reach a broader spectrum of society. Another area that requires future research involves hospice caregivers. Information is needed on effective copping strategies for all those involved in giving hospice care. It is obvious that care for the dying with no hope of recovery is extremely stressful from someone in the health care field, where so much emphasis is out on healing the physical body. While hospice care can be seen as ignoring physical health, it instead chooses to put more emphasis on the emotional, psychological and spiritual health of the patient and family. More research on successful copping styles would give hospice programs ideas for how to provide for the needs of the caregivers. Conclusion Hospice care has grown immensely in the last 35 years. One element that is critical to the success of hospice care is that society must see that the hospice philosophy offers the best strategy of care during the dying process. Despite the image portrayed on the evening news that death is always a tragic event, death is in fact a natural part of life. Once more people in society recognize that death is a natural, inevitable process, they will better understand and respect the hospice concept. ...read more.