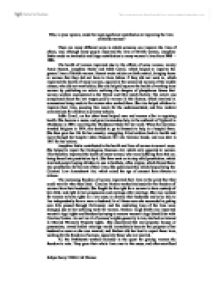 Who, in your opinion, made the most significant contribution to improving the lives of British women

Who, in your opinion, made the most significant contribution to improving the lives of British women? There are many different ways in which someone can improve the lives of others, and, although many people improved the lives of British women, Josephine Butler made an invaluable and large contribution to many women's lives from 1868 - 1886. The health of women improved due to the efforts of some women, mainly Annie Besant, Josephine Butler and Edith Cavell, which helped to improve the general lives of British women. Besant wrote articles on birth control, bringing home to women that they did not have to have babies if they did not want to, which improved the health of many women, especially the unmarried women of the middle classes, who did not want babies. She also helped improve the health of working class women by publishing an article outlining the dangers of phosphorus fumes that women workers encountered in the Bryant and May match factory. The article also complained about the low wages paid to women in this factory, which involved in concessions being made to the women who worked there. She also helped children to improve their lives, securing free meals for the undernourished, and free medical examinations for children in primary schools. ...read more.

She discovered that any property, houses or possessions, owned before marriage would immediately become the property of her husband as soon as she was married, and Barbara did her best to repeal these laws, working for the freedom of women, especially those who are married. All the Pankhursts worked tirelessly in the quest for gaining women the freedom to vote. They gave their whole lives over to the cause, and often sacrificed their health and well being for women. Annie Kenney also worked selflessly for the cause, helping the Pankhursts, often taking over leadership of the Suffragette Movement. Many other women helped to fight for the vote, including Cicely Hamilton, Emmeline Pethick, Emily Davidson, Millicent Fawcett, Elizabeth Garrett - Anderson, and Emily Davies. Josephine Butler also wanted freedom for women, in working conditions, and prostitution. She did not agree with, and fought for the reduction of the number of women forced into prostitution. Women started to get stability in their lives as the system and laws surrounding them and their rights changed, so that they could be secure in their lives. Josephine Butler helped to increase this stability by decreasing the number of young women in prostitution, as she helped increase the age of consent to sixteen, so many more girls and also mothers were safe in the knowledge that children under sixteen would be safe from sex and prostitution. ...read more.