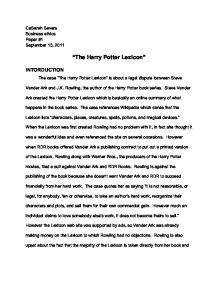 The decision of whether or not to consider self-interest is s moral dilemma the judge will need to overcome. STAKEHOLDERS There are a number of stakeholders involved in this lawsuit including Steve Vander Ark, RDR Books, J.K. Rowling, the federal judge, and the general public. Depending on the outcome of the lawsuit Vander Ark and RDR Books could be affected financially; they could lose the possibility to make a large sum of money. In winning the case they would be able to publish and sell the book with the potential to make huge financial gains. In losing the case they will not be able to publish the book and therefore will lose that opportunity to sell the book. The lawsuit and its outcome could also affect the reputations of RDR Books and the judge. When it comes to RDR Books their reputation could be damaged through publicity. If they lose the case many authors could view it as bad publicity for RDR Books and therefore not want their name associated with the publishing company. ...read more.