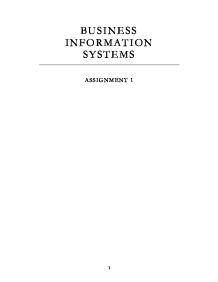 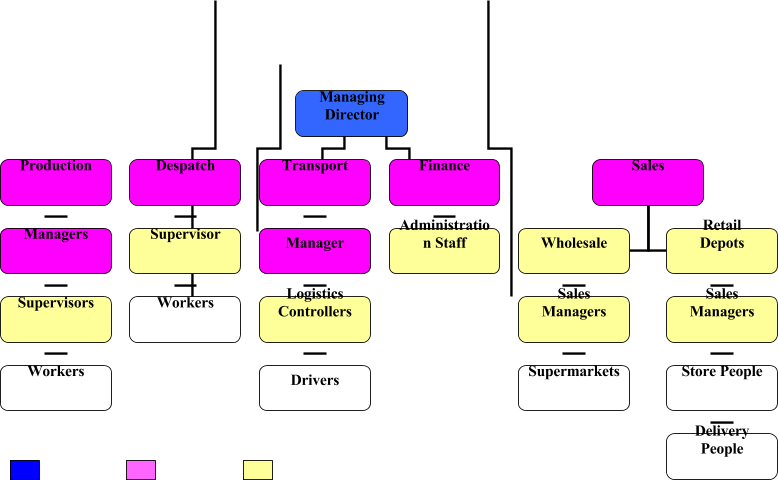 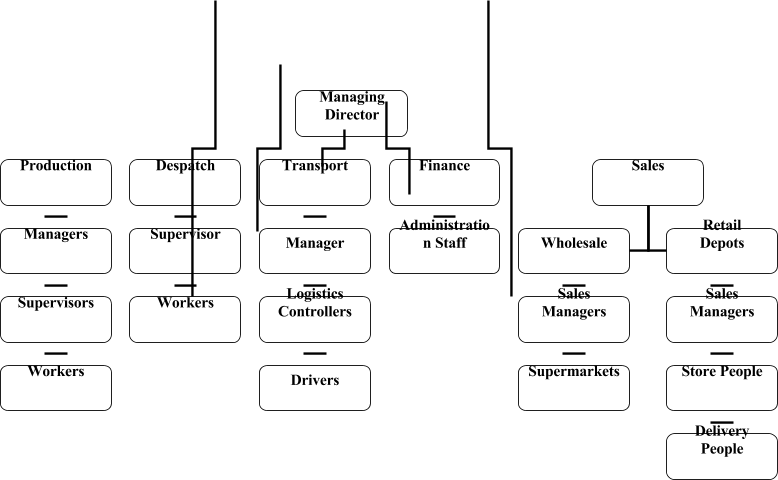 Dale Farm Dairies is one of the largest milk suppliers in Northern Ireland, employing people across a variety of different departments and organisational structures.

The Organisation Chart for Dale Farm provides a clear overview of the company’s structure and the various departments within the company. Departmentation is necessary as a single person is unable to supervise a large number of subordinates. There are generally four main types of departmentation within business structures:

After closely analysing the department structures of Dale Farm, I have identified the most common form of departmentation as functional. The reason for choosing functional is that most of the departments within Dale Farm below the Managing Director, clearly demonstrate a unique functional area of their own although yet also demonstrate strategic and tactical management:

There is no geographical management represented in the organisation chart, the departments are not divided by the products that Dale Farm offer nor by the processes or equipment that they use. The main departmentation of Dale Farm would therefore be described as functional, with tactical management within each department.

There is much debate over the number of levels of Departmentation and management structure within any organisation. Departmentation is necessary as a single person is unable to supervise a large number of subordinates – also known as the span of control. Famous Behavioural Scientist Urwick considered the ideal number of superior authorities to be four in upper levels of management.

Based on his findings, and analysis of the Dale Farm management structure, I can conclude that the span of control here is tending towards the norm. I have arrived at this conclusion because there are five departments with a superior authority for each department. This is slightly above the recommended four superior authorities as stated by Urwick, but could not be termed as above the norm and should instead be referred to as tending towards the norm.

A tall structure would be an organisation which had upwards of eight levels within departments, however in this case the maximum level would be five which is demonstrated in the retail division of the Sales department. Therefore the overall structure here would be considered as flat.

After studying the organisation chart for the Water Service, and analysing its structure, it can be said that its structure is tall. This can be determined by looking at the large amount of levels within departments, for example in the technical department – under the Divisional Manager – there are at least 8 levels.

With reference to the span of control at the Water Service, it can be concluded that this is what Urwick described as ‘Above the Norm’. We can see from the organisational chart that there are at least 7 levels of superior authority, through which communications would have to travel up and down. For example, communication from an employee in the Class III technical department would have to travel up five levels to reach the top of that department’s structure, and a further three levels if he intended his communication to reach the top of the chain.

With reference to the authority patterns within the Dale Farm company, I can conclude that from researching the organisational chart, the authority patterns are decentralised. A decentralised structure means that key decisions are delegated to lower levels within the organisation. It is clear that these decisions are the responsibility of managers and supervisors. As an example within the Sales department, within both the Wholesale and Retail divisions, the managers are responsible for day to day business decisions within those departments.

Another example can be found in the Dispatch department, where the Supervisor is responsible for managing the workers below them. Because the authority pattern is decentralised, decision making is made by the people “on the ground” rather than upper level managers.

Form the organisational chart it can be determined that Dale Farm overall has at the most three layers of management across the organisation. This is demonstrated by looking at the Production department, where the three layers of management would be the Managing Director, the Managers and the Supervisors. Within the other departments there are two layers, being the Managing Director and the Manager/Supervisor of that department.

The behavioural scientist Urwick stated that there should be no more than four superior authorities at the highest level of the organisation, and not more than 12 at the lowest level. It is interesting to note the correlation between the management layers and employee numbers. It would be described as the ‘Norm’ for there to be approximately 4 management layers for a company with 1000 employees.

Form the organisational chart it can be determined that the Water has approximately seven layers of management throughout its organisation. This is demonstrated by looking at the Technical side of the organisation, which contains the following structure:

The information below provides a detailed breakdown of the function and roles of each of the five departments directly under the Managing Director, within Dale Farm Dairies.

The production department contains three layers which are superior to the workers:

The despatch department contains three layers which are superior to the workers:

The transport department contains 2 layers which are superior to the drivers:

The sales department contains a Tactical Manager, who deals with the retail sales through milkmen to the doorstep and the wholesale distribution to shops and supermarkets. The two divisions of this department are described in more details below: