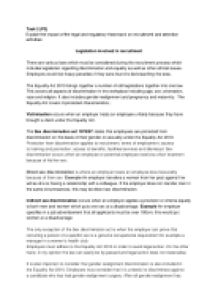 ﻿Task 2 (P2) Explain the impact of the legal and regulatory framework on recruitment and selection activities Legislation involved in recruitment There are various laws which must be considered during the recruitment process which includes legislation regarding discrimination and equality as well as other ethical issues. Employers could risk heavy penalties if they were found to be breaching the laws. The Equality Act 2010 brings together a number of old legislations together into one law. This covers all aspects of discrimination in the workplace including age, sex, orientation, race and religion. It also includes gender realignment and pregnancy and maternity. The Equality Act covers 9 protected characteristics.; Victimisation occurs when an employer treats an employee unfairly because they have brought a claim under the Equality Act. The Sex discrimination act 1975/97 states that employees are protected from discrimination on the basis of their gender or sexuality under the Equality Act 2010. Protection from discrimination applies to recruitment; terms of employment; access to training and promotion; access to benefits, facilities/services and dismissal. Sex discrimination occurs when an employee or potential employee receives unfair treatment because of his/her sex. ...read more.

Employees must receive protection from this type of discrimination, victimisation and harassment. Employees who believe they have been mistreated under the Race relations act can take their employer to the industrial tribunal. Indirect and direct discrimination can also apply to this act. An example of direct discrimination would be a job advertisement stating that only black people can apply for that job. Indirect discrimination would apply if you were discriminated on the grounds of colour or nationality. For example; a rule that employees must not wear headgear could exclude Sikhs who wear a turban or Jews who wear a yarmulke, in accordance with practise within their racial group. The next act which employers must consider is the Equal Pay Act 1970. This act forces employers to pay and women equally. This includes all benefits and aspects of pay. When the act was introduced in 1970, the gap between men and women was 37%. This act ensures that men and women are paid equally when they are doing either; the same jobs, equivalent jobs or jobs of an equal value. This is to ensure men and women are paid the same amount when carrying out the same roles. ...read more.

Employees must consider that they must not dismiss a women because she is taking her maternity leave, deny holiday or other contractual benefits, they must receive paid time off work to attend healthcare appointments and must be able to return to the same job once they have returned from maternity leave. Additionally, employers must consider that it is unlawful to discriminate a potential employee, on the grounds of their pregnancy. However, it is usually the case that employees will chose not to employee a pregnant women, as they will have to find cover once the employee takes maternity leave. It is therefore the case that pregnant women notify their employees after they have taken employment. Overall, the business can benefit from the compliance of the act, and create a profitable business. 1. Employees will feel valued and will therefore be more motivated to return to work. 2. Increase morale, loyalty and motivation amongst the workforce as the employees will see that the company values their staff. 3. Conveying a message which will support the reputation of the business. Additionally, it is important for employee to consider values and morals which are not currently law under the Equality Act 2010. Nepotism is an issue which relates to the favouritism of family members in a business environment. An example of nepotism ...read more.