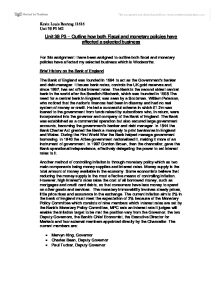 Unit 39 P3 - Outline how both Fiscal and monetary policies have affected a selected business For this assignment I have been assigned to outline both fiscal and monetary policies have affected my selected business which is Woolworths. Brief History on the Bank of England The Bank of England was founded in 1694 to act as the Government's banker and debt-manager. It issues bank notes, controls the UK gold reserves and, since 1997, has set official interest rates. The Bank is the second oldest central bank in the world after the Swedish Riksbank, which was founded in 1668.The need for a central bank in England, was seen by a Scotsman, William Paterson, who noticed that the nation's finances had been in disarray and had no real system of money or credit. He led a successful scheme in which �1.2m was loaned to the government from funds raised by subscribers who, in return, were incorporated into the governor and company of the Bank of England. The Bank was established as a commercial operation but also secured large government accounts, becoming the government's banker and debt manager. In 1844 the Bank Charter Act granted the Bank a monopoly to print banknotes in England and Wales. During the First World War the Bank helped manage government borrowing. In 1946 the Attlee government nationalised it, making it more of an instrument of government. ...read more.

on a variable payment per month will be paying less, meaning they have profited more money to spend at Woolworths due to the low payment made because of the decrease in the interest rate so there is more credit cards spend also. Also this can benefit the company buy planning for future expenditure such as more stock also more people can borrow more money because there is more money available, as they have more money to employ people i.e. recruiting or training. Increasing interest rate: On the other hand if the interest rate were to increase it would be the opposite consumers would limit their spending completely because their mortgage cost would increase. This could lead to business shutting down due to the lack of sales in the store as there is not consistent cash flow. A cut in in the number of jobs 'Food and fuel prices send inflation to new high as City fears interest rate increase' or 'Mortgage lenders increase interest rates' Mortgage lenders announced an increase in the amount they charge borrowers today in response to yesterday's Bank of England interest rate rise, corporations look at high borrowing costs so companies stop working to afford to run the business, reason being they can't afford to pay bills and employees, and can't train the staff, they can not buy the latest equipment for the company and not be able to expand. ...read more.

their debt will increase, which in turn decreases profit and increases loss 'Woolworths' last 200 UK stores have closed their doors for good, leaving more than 27,000 people unemployed. Woolworths went into administration in November with debts of �385m and Deloitte was unable to find a buyer the job cuts will affect staff at the company's head office and distribution centers in Middlesex. The administrators are also continuing talks over the sale of Woolworths' 815 stores across the UK 'Administrators at Entertainment UK, Woolworths' distribution arm, have made 700 staff redundant after failing to find a buyer for the business' Investors Almost half of the investment are in the services sector britian is now the second most popular country in the world for foreign investments reason being because of no tariffs on exprts to other EU countries, relatively low wages, flexiable working, less job protection that in some other EU countries, the English language, first - rate research facilities and economic stability . Then when the companies profits drop, stock price will fall this means investors will need to start rethink their investment strategies by maybe selling their shares 'Retailer Woolworths has been fined �350,000 for failing to disclose important trading information to investors as soon as possible' The retailer was found not to have updated the market on a change to a key commercial contract, likely to reduce its profits by �8m, for nearly a month. Kevin Louis Boateng 11616 Unit 39 P3 M2 ...read more.