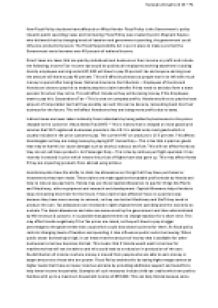 ï»¿Humzah Ahmad Unit 38 – P4 How Fiscal Policy decisions have affected or Affect Honda- Fiscal Policy is the Government’s policy towards public spending, taxes and borrowing. Fiscal Policy was created by John Maynard Keynes who believed that by changing levels of taxation and government spending, the government could influence productivity levels. The Fiscal Responsibility Act is put in place to make sure that the Government never borrows over 40 percent of national income. Direct taxes are taxes that are paid by individuals and business on their income or profit and include the following; Income Tax- Income tax would be paid by all employees working anywhere including Honda, employees earning under £37,400 will have to pay 20 percent tax and anyone earning over the amount will have to pay 40 percent. This will affect businesses as people won’t be left with much money to spend after being taxes. National Insurance Contributions – Employees of Honda and Honda can chose to pay this to enable people to claim benefits if they need to and also form a state pension for when they retire. This will affect Honda as they will be losing money if the Employees want to pay this. Corporations Tax – This is a tax on company profits. Honda would try to pay the least amount of Corporation tax that they possibly can and this can be done by reinvesting back into their business for the future. ...read more.

When public sector borrowing is high, it can mean that the amount of money that is available for other businesses to borrow becomes limited. This means that if Honda would want to borrow for machinery they will not be able to and this could lead to a reduction in production of the cars. Re-distribution of income is where money is moved from people who are able to earn money in larger amounts to those who are poorer. Fiscal Policy enables this by taxing higher wage earners at higher levels that those on lower incomes and also by providing additional support and benefits to help lower income households. Examples of such measures include child tax credits which are paid to families with up to a maximum household income of £59,000. This can help Honda because some people will be getting more which would allow them spend at Tesco. Even the high earners paying these taxes could afford their products as they are earning a high wage. How Monetary Policy decisions have affected or Affect Honda- Monetary policy works in a different way to fiscal policy, but also seeks to help support and economy. Monetary policy works by influencing: The rate of interest that is offered by the central bank which it is operating, Money Supply and The way that the exchange rate works in a country. ...read more.

Inflation is the measurement of the increases in Prices. The target for the UK government is to keep inflation at around 2 per cent to support employment and economic growth. Two per cent inflation gives stability to the economy so it is just as bad to be below 2 per cent as it is to be above it. Monetary policy influences inflation because rates of interest affect spending and therefore demand. Monetary policy also affects the supply of money, again influencing demand and costs, and therefore inflation. For Honda people would have a demand for their vehicles which will result in Honda producing more cars. When the inflation rate rises to 2 per cent, wages will be increased too. This controls cost-push inflation. Low inflation means that workers are more secure in their jobs because costs are stable. When inflation levels are high, Honda must reduce their employee levels to control their high wages, which will then lead to a reduction in aggregate demand. If more people are working, aggregate demand is likely to go up and, therefore, business confidence should go up again as more spending takes place. Actual changes in interest rates affects the levels of business investment, but anticipated changes can also affect the economy. This may be through what are known as second round effects. This could be when Honda isn?t directly affected by a change in interest rates are instead influenced by other businesses Honda works with which are, and so they will see change in demand or customer spending. ...read more.